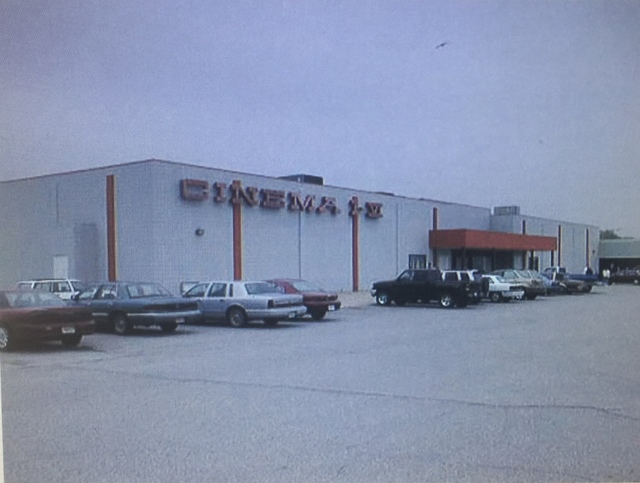 The four screen Dunes Plaza Cinemas opened in September, 1975 by General Cinema. To avoid confusion with the 2 screen Dunes Plaza located in Miller some 25 miles west, General Cinema named it Michigan City Cinemas. It is located directly across the street from Marquette Mall and Plitt’s Marquette Theaters. It’s premiere attractions were “Rollerball”, “Once Is Not Enough”, “The Other Side of the Mountain” and a Disney double feature of “Cinderella” and “One of Our Dinosaurs Is Missing”.

The theaters were an instant hit to the town of Michigan City as they only had the Plitt two screen previously. General Cinema wisely tried to put some movies that were exclusive to Chicago and no where else in Northwest Indiana. Many times people who frequented the three twin screens General Cinema had some 40 minutes away would make the trek to Michigan City. In 1977 GCC booked both “Star Wars” and “Smokey and the Bandit” for exclusive Northwest Indiana runs. The decision paid off as both films played for six months there. Other films that played Michigan City that ended up never coming to the twins or not coming until weeks or months later included “Network”, “The Boys From Brazil” and “Halloween”.

In 1981 the back of the building was knocked down and two tiny theaters were added. By walking down a hall you entered through a metal door into a small hallway with the two theaters on opposite sides and a small concession stand in between. Rarely was that concession stand ever used. In 1985 a huge factory in Michigan City closed down putting hundreds out of work. Due to this the attendance began to drop considerably.

In 1988 General Cinema changed the admission policy to $1 at all times. While business increased so did the expected problems that come with it. In 1989 General Cinema sold the theater to Kerasotes who continued for a time with the dollar admission. Sometime in the mid 90’s Kerasotes reverted the theater back to full price admission and first run films. The name of the theater was also changed to Dunes Plaza Cinema.

A large, beautiful marquee was built to replace the old one which is quite contrary to the Marquette across the street where both marquees were taken down. The Dunes Plaza Cinema closed in October 2005, having last operated as a second-run theater.

The Dunes Cinema is now a second run house with an early evening showing on weeknights and one matinee and one early evening show on the weekends. Also, the beautiful marquee that had been built is now gone. The sidewalk to the left and right of the entrance has weeds growing up through the sidewalks as well. It would appear Kerasotes is slowly giving up on this theater and it will close sooner rather then later.

As I predicted above the Dunes Cinema has closed almost thirty years to the day after it opened. Too bad since it played a major role in my life. I imagine given the size of the building it will be converted into yet another superstore.

Not surprised this theatre is closed. The strip mall it’s in is nearly moribund and the Marquette Mall across the street ain’t doin' much better either.

The strip mall that this cinema is/was in has just undergone some serious renovations.

Yes I was by there last night. The cinema has been demolished as has all the buildings on that east side. An Office Depot now stands where the cinema once was.

What fond memories – I worked at the Dunes for nearly 4 years.

Some other facts about this theater:

It was frequented by Chicago Movie Critics Gene Siskel and Roger Ebert, who both had vacation houses near by. Gene was soft spoken and nice. Roger..not so much.

The second floor where the projectors were housed was entirely open. It was a huge room. On the west-facing wall, a giant closet that store the letters for the 4-story marquee.

The east side of the second floor had two rooms for the projectors for theaters 5 & 6. Between them was the stock room.

The second floor also had the giant dual-kettle popcorn machine. You could fill up a 25+ gallon bag every 15 minutes. Woe be the person who got suck on popping duty…for a 7 hour shift! We would throw stale popcorn on each other’s cars and watch as the seagull would attack.

In 1989, the interior was renovated and the lobby had a new popcorn machine installed. I was the first person to clean it. What a pita.

In 1990, a terroristic threat was made upon the theater. The FBI came in and set up cameras and watched everyone for a coupe of weeks, but nothing ever happened.

After Light House Place opened, we saw a resurgence in attendance. Before retreating back to Chicago, day-trippers would often stop by and catch the 3 or 4 pm showing of something. 95% of the Diet Coke we sold were to people from Downtown Chicago.