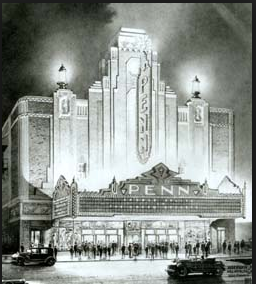 The William Penn Theatre was an entertainment palace in West Philadelphia with vaudeville and movies envisioned by Gustavus A. Wegefarth, best known for the Grand Opera House. Wegefarth announced the ambitious project in 1905 at $500,000 with plans by architect Carl P. Berger. The cornerstone was laid on November 14, 1906 with contractor P.J. Hurley working until 1907 when things took an unexpected turn that would halt the entire project…… Gustavus A. Wegefarth committed suicide and the project was offered at sheriff’s sales three times between 1907 and 1908, the stalled project was finally brought to completion with some revisions by architect Matthew Schmid & Son.

The 3,230 seat venue launched September 20, 1909 with vaudeville and Motiograph short films. The theatre was refreshed in 1914 and given a final makeover to the plans of architectural firm Hoffman-Henon Co. in 1925/6 as the theatre tried to update when it was taken over by Warner Bros. who leased the theatre to the Mae Desmond Players to be used as a playhouse. The theatre did not convert to sound films and closed in 1929 with live plays.

The building was vacant and suffered a toppled water tower in 1931 and a lightning strike in 1935 that knocked bricks to the ground. This was likely its undoing as a salvage sale occurred and Central Wrecking Salvage razed the building in April of 1936.