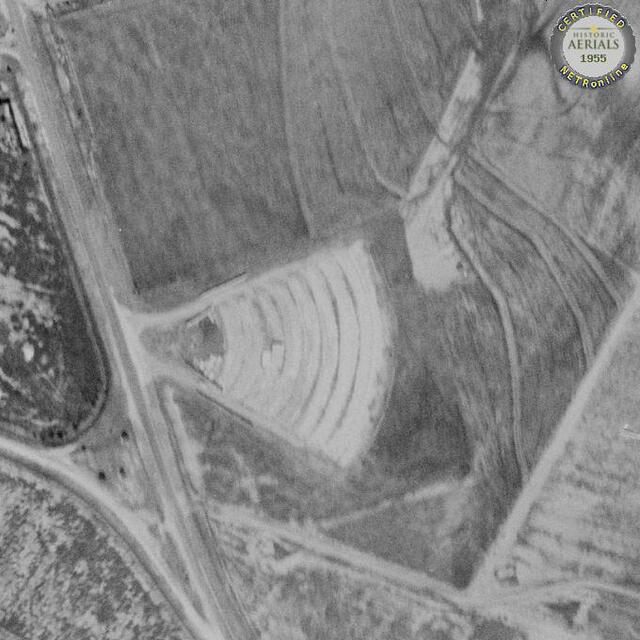 A Boxoffice article from July 28, 1949 announced plans to build a drive-in with a huge screen and a playground at a cost of $250,000 in Gonzales, Texas. This was to become the Lynn Drive-In, owner Lynn Smith. Smith also owned the indoor Lynn Theatre in town. The drive in opened in late-1950. Jack Corgan was the architect of the theatre design. The screen tower was damaged by a tornado after only being in operation a few years.

The tower was rebuilt and the name changed to the Apache Drive-In. In 1962 the drive in was sold to Frontier Theaters. Sometime in the mid-1970’s the tower was destroyed again by a tornado and it was not rebuilt. The land and the concession building were sold. The new owners for while made their home in the old concession building, but that has since been torn down also.

The address puts it right on the property about where the entrance road use to be.

Today, there is virtually nothing left of the drive-in. However, on the east side of the property you can just make out a hint of the final few ramps in the back.

Billboard, Oct. 11, 1954: “A severe rain and windstorm damaged the Twilight Drive-In owned by Lynn Smith, Gonzales, Tex. The wind blew down the screen which probably will not be placed back into operation until next spring.”

Which apparently caused a name change, as described in the June 11, 1955 Billboard: “The name of the Twilite Drive-In at Gonzales, Tex., has been changed to the Apache Drive-In by Lynn Smith, owner. CinemaScope has been installed and the screen tower rebuilt. It was blown down by high winds in 1954.”