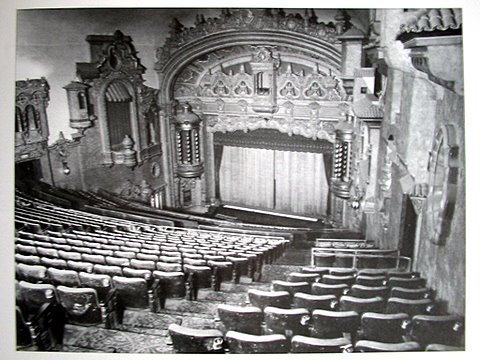 This spectacular Thomas Lamb designed Atmospheric style theatre first opened on December 20, 1928, on the same site as Proctor’s Pleasure Palace Palm Gardens, which dated back to 1895, and was demolished to make way for what F.F. Proctor termed his “Greatest Triumph”.

The theatre had two entrances and two marquees, one on E. 58th Street and the other in mid-block on 3rd Avenue. Tunnel-like lobbies connected them to the theatre’s high-vaulted grand foyer, which had ornate staircases at each end that lead to the mezzanine promenade and balcony. The Spanish Renaissance auditorium with its “midnight sky” ceiling was similar to that of Lamb’s Keith-Albee Theatre in Flushing, Queens, which was built simultaneously with the 58th Street Theatre and opened five days later. The 58th Street Theatre was especially notable for its huge balcony, which had almost as many seats as the orchestra floor and rose from above the latter’s 12th row to afford good views of the stage attractions. That was unfortunate for patrons sitting further back in the orchestra because they could only see the balcony’s underbelly and were cut off from the sky effects on the main ceiling.

Proctor’s East 58th Street Theatre opened with vaudeville and a feature movie that was first-run for its neighborhood but had already been shown in one of the Broadway-Times Square showcases. There was a complete change of program twice a week. Perhaps because it was the first Atmospheric style theatre to be built in Manhattan, the East 58th Street Theatre drew crowds for several months, but once the novelty wore off, attendance plummeted.

Situated in a busy shopping district that included Bloomingdale’s department store, the 58th Street Theatre did good business but rarely enough to fill its 3,163 seats. In 1956, RKO did some modernizing to the plans of architect John J. McNamara, and reduced the seating capacity to about 2,000. However, that was still too large for that area of 3rd Avenue, where it had to compete with several new art theatres of 600 seats or less. Its operating costs were too high, and the value of its underlying ground was sky-rocketing.

On May 15, 1967, RKO closed the 58th Street Theatre and put a sign on the marquee that said “Go to the RKO 86th Street for the Best in Entertainment”. The 58th Street Theatre was sold and demolished for a 39-story luxury building. To make up for its loss, RKO built a new twin cinema on 59th Street, which is now also ancient history.

I was looking through the OLDNYC site of the NYPL and came across a rare photo from 1928 of 58th Street street view that showcased the RKO Proctor theater. I uploaded it to the photo page of this site. I included the OldNYC web page, but I’m not sure whether the link will work.

“AlexNYC,” that photo shows the exterior of the original Proctor’s on that site just before it was demolished to make way for the Thomas Lamb atmospheric.

The RKO 58th Street closed for demolition on May 15th, 1967, according to Boxoffice Magazine at that time. The 39-story office building that replaced it was expected to be ready for occupancy by the summer of 1969. Plans to include a small cinema in the new building were scrapped due to nearby competition from the Coronet, Baronet, Cinemas I and II, Sutton, and Trans-Lux East.

I am currently reading Razzle Dazzle by Michael Reidel. a fascinating book for any Bway show devotee. it also states that in the early 50s the men’s room here was a top gay cruising spot. having come of age after Stonewall I am fascinated by how any stop became a gay cruising spot.

Too bad that vaudeville is dead. “Mike” and “bigjoe59” would have made a great double act.

to Mike(saps)I give you an A+ for the wit of your reply. but as stated in my original post having come of age after Stonewall I am fascinated as to why certain spots became gay cruising spots.