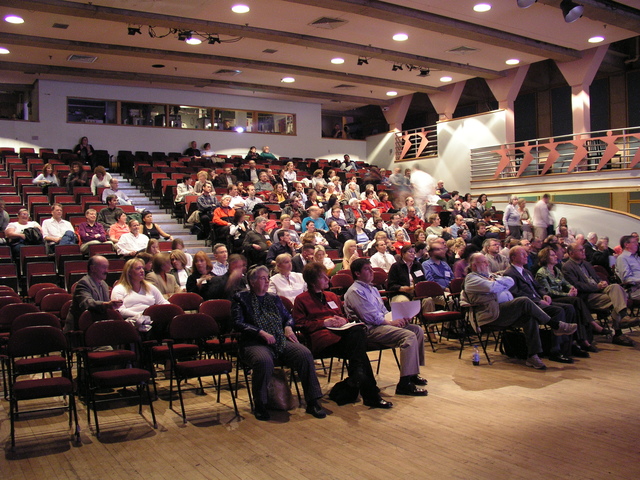 International House, designed by architects Bower & Fradley as a 14-story Brutalist style building, opened in the Fall of 1970 as a dormitory and cultural center. International House had been founded nearby in West Philadelphia in 1910 and in 1918 moved to 3050 Spruce Street to the Frank Furness designed Pott’s Mansion, which still exists. International House moved to larger premises in 1959 at the Whittier Hotel at 15th Street & Cherry Street in City Center, Philadelphia, but the hotel was demolished to widen a street.

The auditorium is on the ground floor of a 5-story atrium that functions as an internal street. When the building opened, what became the auditorium was termed a “general purpose meeting room” had a stage and removable seating with a capacity of 700.

In the late-1990’s, the program transitioned with a new focus on year-round film programming and an expanded scope of moving image presentation that included experimental film and video works, artist cinema, digital art and other emerging forms.

In 2008, the theatre, which already had stadium seating, was renovated including with new, wider chairs and renamed Ibrahim Theatre due to a major gift by A.A. & Nina Ibraham. A Barco 2K digital cinema projector was installed in 2012, the auditorium already having 16mm & 35mm projection. The screen size is 29.5 feet by 15 feet. In May 2017. Sound from behind the screen, includes Dolby SR. Film at International House was renamed Lightbox Film Center to create more visibility.

On April 25, 2019, due to costs of up-keeping a building with dorm rooms which are out of date, and due to integration of foreign students throughout the community, the non-profit International House announced closure at the end of the year, with the building being marketed for sale. The film center served for decades as the premiere venue in Philadelphia region for independent film, classic films and film. It announced in October 2019, that it would move after this year to the former Gershman Y at S. Broad Street and Spruce Street, now part of the University of Arts, into a 200-seat auditorium that will be custom built. The Jewish Film Festival screening on December 10, 2019 of “All That Jazz” in 35mm, for the film’s 40th Anniversary, is the last film to be shown at International House.