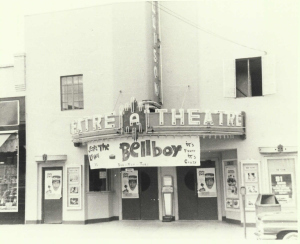 Flickr link with another photo of the Allison marquee. Image will enlarge within link.

Link with remembrances of the Allison Theatre.

Solid Rock Cafe was the most recent tenant, closed sometime after 2017 via Yelp.

The mayor for the city Geo P. Haslem and Mr. J. E. Aaron, the owner of the Allison, had made plans just before its opening. The Allison Theatre opened on August 14, 1940 with Lana Turner, Joan Blondell and George Murphy in “Two Girls On Broadway” along with an Our Gang short “Captain Spanky’s Showboat” and a newsreel.

Martin Theatres of Columbus, Georgia took over ownership of the Allison Theatre on May 14, 1945. The deal that was conserved was negotiated by J. E. Stilwell, also from Columbus, GA 2 days prior. On October 24, 1954, the Allison Theatre installed CinemaScope and the first film is the well-known demonstration testable film “The Robe”.

The theater has been managed by Martin Theatres’ popular manager Olin Atkinson of Columbus, GA, and operated it for more than a decade. Besides, after getting his job, he flew to Tifton, Georgia and was succeeded by Mack Jennings who transferred there from Evergreen, Alabama. Atkinson has been in the job since 1942 but J. E. Aaron was still operating at the time.

On November 15, 1959, Atkinson received a letter from E. D. Martin of Martin Theatres, in which he was severely injured during a race at Daytona Beach, Florida after his car flipped over and was wrecked. He had burns from his face, neck, shoulders, left, wrist and ankles, but his eyes weren’t injured and were not burned all over his body because he had protection with flame-proof overalls.

Atkinson left the theater due to his health and was taken over by Alvin Hodge on January 27, 1961; and later by Arnold Woolf later that early September. Alvin left for the city of Huntsville, AL on August 28. The relief manager of the theater is Leonard S. Cook.