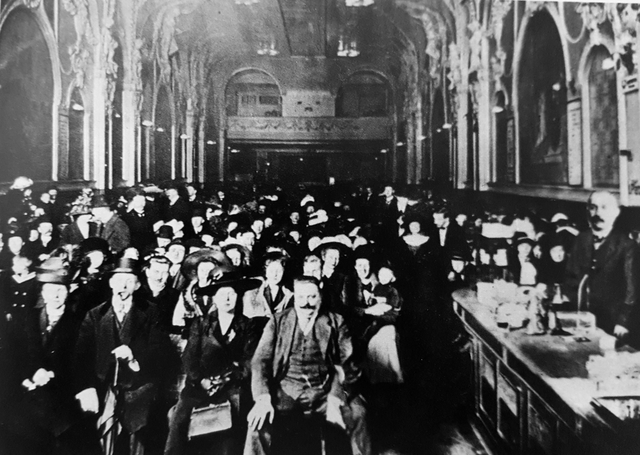 Located in the city centre district of St. Pauli, in front of the famed Reeperbahn. Knopf’s Theater lebendiger Photographien (Knopf’s Theatre of Living Pictures) was opened in 1905. It was operated by Eberhard Knopf. He always announced it was the first movie theatre in Germany, but this has never been proved, although it is true it was a very early German cinema.

Eberhard Knopf had started a business on 20th February 1900 next door at 21 Spielbudenplatz showing short movies and other attractions like'the tallest man in the world' in a small building he named Eberhard Knopf’s Konzer und Automatenhaus. In 1902 the first ‘longer’ movie “Robinson Crusoe” was presented. The business was so successful that he moved in 1906 to adjacent Spielbudenplatz 19 and opened his Living Pictures cinema with 667 seats. In 1918 he bought the cinema operating nearby at 20 Spielbudenplatz which was operating as Deutsche Reichshalle Kinomatographentheater and he re-named it Deatsches Volkstheater, still playing movies. (this has its own page on Cinema Treasures).

In 1922 Knoph decided to merge the two cinemas into one large 1,055-seat auditorium and the new cinema was renamed Knopf’s Lichtspielhause. In 1930 it was operated by Martha Struckmeyer and she sold between 1930 and 1950 10.8 million tickets to moviegoers. In the meantime, the cinema had survived World War II without damage and when it reopened in 1945 it was one of only 10 cinemas in Hamburg operating for public screenings.

Knopf’s Lichtspielhause was equipped with CinemaScope and stereophonic sound in 1956. In 1962 it was taken over by Ellen Dietrich and in 1965 it went over to screening adult movies, re-named Eros Cine-Center.

In 1991 the Minder Filmtheaterbetriebe operated the discotheque and cinema and it was re-named Kino im Docks. In 1992 the name of the company changed to M.A.D. GmbH operated by Karl Herrmann Gunter.

In 2008 Amir Ahmadi operated the Docks. Since 2010 it has been operated by MTM (more than music) but films are not screened any longer.