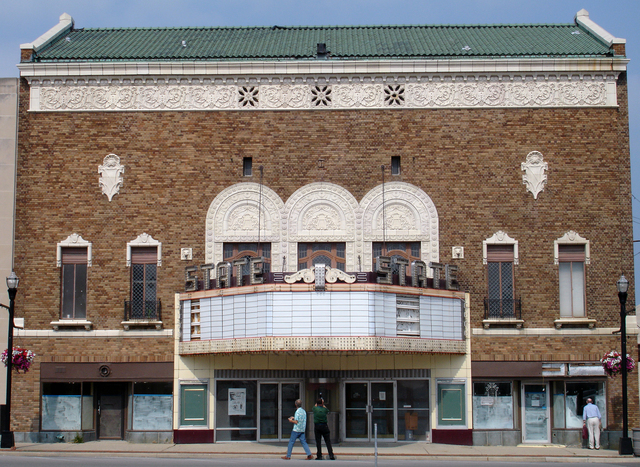 The State Theatre in Anderson, IN is a classic movie palace that opened May 30, 1930. It was still showing movies until it closed in 2008.

In 2000, it was undergoing renovations and in 2007, there were plans to reopen as a live venue, but in 2013, the building remains closed. Renovations continue in 2017 to convert into an entertainment center/conference center.

The renovation stalled when 1 partner refused to make any payments. They are now in court to resolve the dispute. The roof was replaced, the interior plaster was restored and the auditorium was repainted to original colors. The plumbing, electrical and hvac need replacement and the seats have been removed. About $750,000 was spent before work stopped 2 years ago. In spite of that, the State was appraised at only $52,000 -roughly what it sold for 10 years ago before any improvements! Unfortunately, this is typical of the downturn in Anderson’s economy. Several neighboring buildings are listed for ½ of what they sold for a few years ago. The City had a firesale on downtown properties it owned due to a disasterous failed development project. The downtown has massive vacancies, lacks sufficient parking, anticipated new developments have not materialized, and many existing businesses continue to fail. The State’s interior is still a construction site and it was estimated to cost $1 million more to complete the conversion to a live venue, and would probably cost at least $250,000 to finish it as a cinema. Tough numbers in a rough economy and a distressed area. It is probably best they sort out their problems and then wait out the economic downturn. The owners had a team of highly experienced, qualified professionals and a solid plan.Unfortunately, internal problems, coupled with the recession, have proven costly and delayed this great theater from reopening.

Since my last report the situation has gotten worse. The partners have not resolved their issues and the property was foreclosed by the Sellers. The minor partner, Marla Rochlin, clandestinely set up a new LLC to fraudulently transfer the property to herself. She is now foreclosing on herself (?) and her partner. Karen Paradiso, a to gain control of a building she has refused to contribute or do necessary maintenance to for several years. Consequently the State is seriously deteriorating. These photos from Flickr illustrate the scope of damage:
View link
Bids taken in 2005 estimated the needed repairs to be several hundred thousand dollars. Since then, the pipes have burst from freezing, water has caused severe damage throughout the building, the hvac system needs repair and the interior is still a construction site without electricity, water or heat since the work was ordered stopped years ago by Ms Rochlin. The once beautiful marquee is broken and rusting.
The City has shamefully stood by and offered no assistance. They gave the Paramount $150,000 annually for years, along with other funds and services. They allowed the State to remain a shuttered and rotting eyesore 1 block away and ignored requests to help resolve the situation. Karen still wishes to continue the restoration and open the State as the community catalyst the project had envisioned. I can only hope this property will be freed up and the disputes resolved so that can happen.

I was lucky enough to have had a chance to play a concert there back in 2001. At the time it was partly owned by the father of one of my friends. It still had all of its original seating and stage. I even have have video of this event and it’s hard to believe that most of what you see in the video is gone. It was still beautiful then. I don’t understand what these people were thinking. As for my friend’s dad, he had a smaller share and almost no say in what happened to the building. To this day his extremely disappointed with how the current owners have destroyed this theater that was in perfect working order just a decade ago. This city is mostly to blame for this screw up. They should have worked harder to protect it from people like this, especially after what had to be done to save The Paramount.

ChrisNealis, I respectfully submit the following rebuttal: The 5 local partners owned the building for 5 years but did not put money into its upkeep, per their own admission. Their only outlay was an emergency electrical repair that was needed to present their first concert. When they sold the building (for 6 times what it was worth) it was because they admitted they had no experience and had run out of money. The California group had experience and a solid plan. That was thwarted by issues detailed below.

As for the theater you claim was in “perfect working order”, it was not. The buyers would have loved to be able to present events immediately (as they were misled to believe they could), but the building was a broken relic and not in useable condition. The roof had massive leaks that left huge holes in the plaster ceiling and black mold covering the rotting upstairs dressing rooms. The projector needed repair, the screen was ripped, the curtain was in shreds, the hvac system was barely functioning, the plumbing and electrical systems were illegal and inadequate, the reworked fly system was jerry rigged and unsafe, the non-original seats (which were from a 3rd re-seating in 1960) were in bad shape and were donated to the Mainstage Theater in Anderson. Their removal had been planned and approved all along by the Sellers as part of a new dinner theater style seating arrangement for food and drink service.

You fail to mention the new owners completely replaced the roof down to the rafters, repaired the plaster ceiling and walls, restored the paint to original colors and repaired the hvac system. Nothing original was removed from the theater. Also, per the Purchase Contract, all work was done with the written approval of the Sellers, who occasionally came in to see the progress and commended the new owners on the great job they were doing. By the way, that too is on video.

While all the work was not fully completed, as detailed in the posts below, the primary objective was always to immediately secure the physical structure and restore it to its 1930 glory. That was accomplished. When your band performed there you played in a white-washed, leaking, non-original venue with amateur repairs to the plumbing, electrical and mechanical systems and an ugly wooden extension added to the stage and covering the orchestra pit. There are photographs, inspection reports, architectural studies and contractors bids to support all of this. One last thing, the new owners have a 30 year history in historic preservation of theaters. They did work with the City to insure the building’s protection by having it added to the National Register as a contributing structure to a historic district.

Dear state46016: I hope that you are still available. You had very interesting information regarding the State Theater. Please contact me at . Thank you. I am looking forward to hearing from you.

There may be hope

See the new facebook page for updated progress and some amazing pictures of the interior.