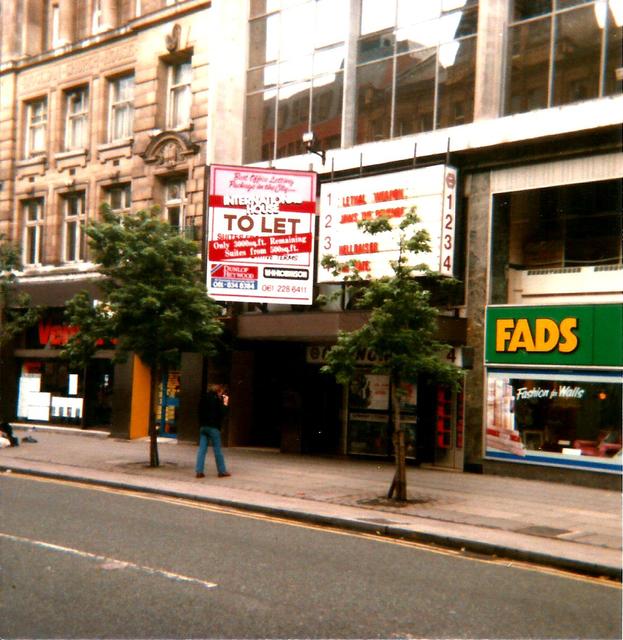 In Manchester city centre, in March 1972, when the Star Group converted the Regal Twin Kinemas on Oxford Road (see separate Cinema Treasures entry) into their five-screen Studios complex, they had ambitious plans to open another multi-screen cinema in the city. The site chosen was not too far away, and Studios 6, 7, 8 & 9, constructed at a cost of £130,000, opened on 10th December 1972.

The auditoriums were located on the lower ground floor of a new office block, New Deansgate House, with the entrance and advertising panels on Deansgate Street. An automated projection suite served all four screens via a specially designed mirror system.

At least initially, Studios 6 and 7 operated on a separate performance basis, with advance booking, while Studios 8 and 9 presented continuous performances.

Manager Peter A. J. Hannavy, 40 years of age, who managed both complexes, was lauded as probably the only manager in the country - or, possibly, even the world - to have responsibility for nine cinemas.

After the ‘original’ Studios 1-5 closed in September 1986, Cannon 1-4 lasted for almost two years, until closure on Wednesday 1st June 1988. The final films were: Screen 1: “The Principal”, starring Jim Belushi; Screen 2: Disney’s “The Fox and the Hound”; Screen 3: teenage musical “Can’t Buy Me Love” and Screen 4: Tom Selleck and Steve Guttenberg in “Three Men and a Baby”.

Since 1988 the office block has undergone major refurbishment, which has removed all traces of the former cinema.

‘New Deansgate House’ was originally built by The Co-operative movement, as overflow accomodation for its growing presence in the city. It replaced The Deansgate Arcade. Built in the Co-op’s house style, of the time, the name continued their policy for naming many of their new-builds, across the country, as ‘New ****** House.’ The closest example, at the time, being New Century House. The ground floor, front, included a Co-op store. The letting off, of the ‘lower-ground floor’ helped finance the build. The following url is to a Manchester Libraries photo. https://images.manchester.gov.uk/web/objects/common/webmedia.php?irn=4393&reftable=ecatalogue&refirn=4821

When the Co-op vacated the building it was renamed International House and the store became occupied by Fine Art Developments, of Holmes Chapel, trading as FADS. Since that company’s demise, the frontage has been split into various catering establishments. Whilst the cinema existed there was also access at the rear, onto Parsonage Gardens.