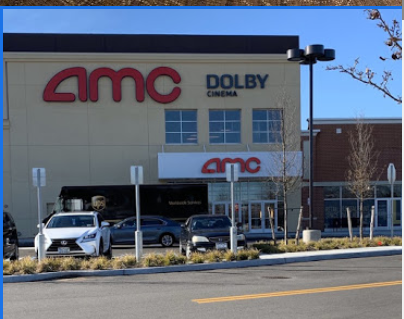 The theatre, which opened November 25, 2019 is housed in a portion of the former Sears store. There are two prime auditoriums, Dolby Cinema and Prime. In some of the auditoriums the recliners are heated. Some offer dining. Cocktails are also available.

Wonder if the small, neighborhood Elwood will be able to survive this.

When interviewed prior to the opening a representative of AMC didn’t divulge the total seating capacity but indicated that the auditoriums seated between 45 and 181.

Hope to see some pictures of this theatre

They’ve modified the name in the ads to AMC Dine-In Huntington Square 12. Was confusing since the actual village of Huntington, location of the AMC Shore is some distance away.

He will repaint the walls, upgrade the marquee and replace the carpet at his 1960s-era, four-screen theater, Elwood Quad, in East Northport in a few months. He also plans to lower ticket prices.

The new arrival he’s preparing for isn’t a blockbuster movie.

“We are concerned,“ said Levinson, who also owns the Bellmore Playhouse, a seven-screen movie theater that is about 20 years old. “When AMC opens, it’s going to be at least a 15% drop. It could be more,” he said.

The number of independent and small-chain movie theaters has been shrinking for years as they lose customers to large chains with more theater amenities, subscription-based online streaming services such as Netflix and Hulu, and other entertainment options.

“I believe that the independent theaters will always be there. But there’s not many of us left,” Levinson said.

Nationwide during the same period, the number declined 9.9 percent to 4,370 movie theaters, according to the bureau.

Most of the movie theaters in the United States are mom-and-pop operations, but four large chains — AMC Entertainment Inc., Cineworld Group PLC (owner of Regal), Cinemark Holdings Inc. and The Marcus Corp. — account for about 55 percent of revenue, according to Patrick Corcoran, spokesman for the National Association of Theatre Owners, a Washington, D.C.-based trade group.

AMC, the largest operator in the United States, has seven theaters on Long Island, including a 17-screen, 21-year-old venue in Stony Brook that it plans to renovate next year.

The company’s new East Northport theater “will be a state-of-the-art, brand-new movie theater where people can expect the best that AMC has to offer,” said Ryan Noonan, a spokesman for Leawood, Kansas-based AMC.

In June 2018, Regal opened its ninth Long Island theater — a $30 million, 13-screen venue in Lynbrook on the site of its closed six-screen theater that opened in 1922 and was demolished in 2016.

New theaters have an average of eight to 12 screens, Corcoran said.

Please update, some of the nearby theatres are Regal Deer Park, AMC Shore 8 and AMC Stony Brook 17

ridethectrain the nearby theatres feature of Cinema Treasures is problematic. You can’t rely on it and the whole program logic would have to be changed to make the updates you want.