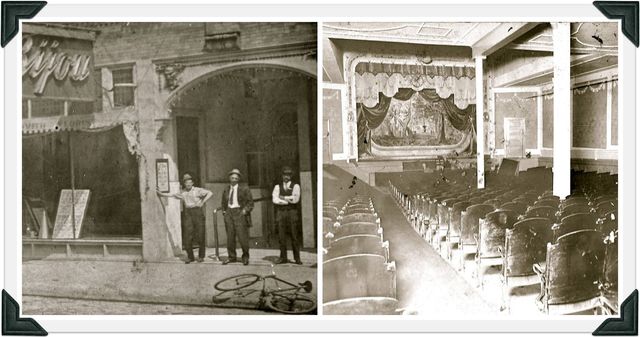 Built in the Fall of 1903, opening as a vaudeville house. Ran motion pictures as of 1909. Was still in operation in May 1931 when it was leased by Schine Circuit Inc. along with the Piqua Theatre and Miami Theatre in a single deal. It was listed as (Closed) in the 1932 edition of Film Daily Yearbook.

Building is still standing with vacant retail and a partially bricked up facade.

To get to the current Google street view, you have to type in 100 W. Ash Street, then scroll a half block to 114-118. (The actual address will not get you there) You will see the stone detail above the 3 men in the Overview photo. There are two on the building. I am assuming it was the one on the left pictured. With the original arched entrance now bricked over. I’ll bet that that arch and the stone face beside it are encapsulated behind the brick and shingled overhang.

The address for the Bijou was 120. The building was constructed sometime between 1898 and 1905, replacing various homes and businesses. The 1905 map shows the western half as two vacant storefronts.

The theater involved a substantial remodeling of that half of the building. As originally constructed, it was two stories until about halfway back from the street, when it was reduced to one story. After the remodel, the theater had a short and narrow entry between two much reduced storefronts, which in 1911 were a china shop and a news stand. The shape of the rear wall of the two-story section was modified, and the one story rear section had a large fly tower at the rear, and in front of this, an odd rectangular three story section over the middle of the auditorium.

The theater space is noted on the 1949 map, but appears to be vacant. At some later point, the building was badly butchered, and the top story removed. It appears that the rear of the theater was unaltered. Considering the ‘quality’ of the remodel, I doubt any of the theater entry was preserved.