Showplace ICON at The Boro 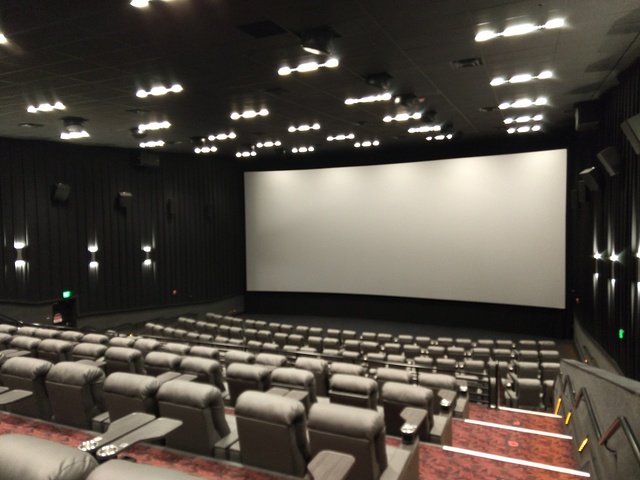 Opened on March 6, 2020. Comprised of two floors, Showplace’s latest and newest theater complex to be featured on the East Coast and specifically the Tyson’s Corner’s newest neighborhood: The Boro, has the most state of the art amenities the chain has to offer. Four Icon-X (fixed ‘scope’ widescreen) screens with Dolby Atmos sound, and 3D presentations through 4K Barco laser projectors. The other ten screens are 2K Barco laser projectors and feature 7.1 surround sound capabilities; two of said auditorium systems can present 3D features. Theatre one through eight are on the first floor, and nine through fourteen are on the second floor. Showplace Icon also offers membership to the theater with perks, as well as reduced ticket pricing on select nights.

The soft-opening of the theater happened on February 28th, with the official opening on March 6th. ICON-X auditorium(s) One seats 226, auditorium Two: seats 200, nine and ten seat 225. I saw ‘Rise of Skywalker’ last Sunday and ‘Birds of Prey’ yesterday; and I have to say the audio calibration and specifically the Dolby Atmos sound are acoustically top notch. I also like the plush seats, that only offer the ability to shift into a one’s comfortable seating position, but also offers ‘heating’ – tres chic!

This is my first time to a Showcase ICON theater and I have to say, I really like the fact the company policy has four trailers max before a feature – not the standard over twenty minutes at the other movie theater chains.

I’ve been to this theatre several times now since they’ve gotten back to full operation following the pandemic and I would say it is, on balance, the best cinema in the DC area in terms of presentation. In addition to the four IconX PLF screens, the five largest conventional screens (#7 and #11-14) are all fixed scope; the five smallest are fixed flat. Picture quality is always sharp, bright, and crisply framed if the aspect ratio is conventional and matches that of the screen. The sound engineering is also especially excellent; the volume in all the auditoriums is cinematically loud and and there is clear surround channel distinction. Having nine scope screens out of fourteen and four PLF/Atmos houses gives them the edge over Alamo in my estimation; even though Alamo still uses masking most of their conventional screens are flat and not especially large. The three largest IconX screens (#1, 9, and 10; #2 is a bit smaller) are about as big as Alamo’s Big Show screens, making them them among the widest screens in the region with the exception of the Smithsonian’s two true IMAX screens. Their seats also top Alamo’s; Icon has the widest and cushiest recliners I’ve ever experienced in a cinema, and the heating is a nice bonus. There’s a nice bar with a large seating area on the first floor, as well as additional lounge areas on both floors. They allegedly have an adult-friendly policy for shows after 8pm: kids under 7 aren’t allowed in PG13 or R rated films, and ages 7-17 must be accompanied by an adult. How they enforce this given their advance and fully-automated ticketing process I’m not certain, but I’ve never encountered any audience issues here. It would be nice to see them get some more independent programming; they show a lot of Indian films but more traditional art house fare would be nice.

The concession ordering process is the one thing Icon could improve on. “Regular” concessions (popcorn, candy, soft drink cups) are ordered at kiosks in the lobby and then picked up at the downstairs concession stand; the one upstairs never seems to be open. When they first opened orders were sent to concessions automatically and you could pick up when your number came up on a screen right next to the stand; that process now evidently no longer works and you have to take your receipt to the concession stand and have it scanned; then they prepare the order. They also have a full service menu for which the ordering process is entirely virtual; either ahead of time or from your seat via the Icon Extras app, from the kiosks, or using a newly implemented QR system at each seat. I haven’t tried the QR system yet but the other processes work fine, albeit service is a bit slow. Finally, the only way to order alcohol is directly at the bar, and I’ve overheard folks being confused by this. They could do themselves a service by streamlining these processes; I imagine they’re cutting corners a bit due to a 14-screen, 1800-seat cinema being quite large for a full service dine-in experience. Those quips aside, I really do think this is the region’s best cinema, and it being Metro-accessible is another bonus; it’s just a short walk up the hill from the Greensboro station.

How did they survive closing a few weeks after they opened

I suspect favorable lease agreements, deferred rent payments, etc., the same things that saved a lot of businesses. The Boro is still an up and coming development and Icon is their crown jewel; there’s no way there were going to let them leave. It did take people a while to find it once they were opened permanently in April 2021, but it does great business now.

Actually the free tier of their membership program waives both the booking fees and the PLF upcharges. So just by signing up you can cut $6 off an IconX ticket; regular shows are $14.75 without fees.