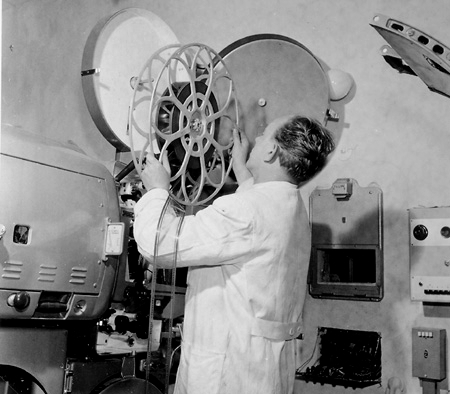 Located in the city centre district of Innenstadt. The Savoy Filmtheater was opened on 18th April 1958. The 879-seat cinema was designed by architect Hans Nehaus and was operated by Willi Golderman KG. The cinema contained a deeply curved TODD-AO screen and two DP universal projectors for 35mm & 70mm film. A 6-channel stereophonic sound system was installed. The opening attraction was the Paramount VistaVision production of “The Ten Commandments” starring Charlton Heston & Yul Brynner, directed by Cecil B. de Mille. After that followed the 70mm TODD-AO production of “Porgy and Bess” starring Sidney Poitier and directed by Otto Preminger. A few weeks after the opening of the Savoy Filmtheater, a second 242-seat screen named Atelier im Savoy was opened. It screened art house movies. Later a third auditorium was addded named Apollo 69 which had 207 seats. In 1993 two more screens were added named Linse 1 & 2 with seating for 45 & 55.

In 2000 the first and largest Savoy Filmtheater auditorium became a live theatre.

In 2006 the Atelier im Savoy was re-opened and was operated by Udo Heimansberg. It again screens art house films.