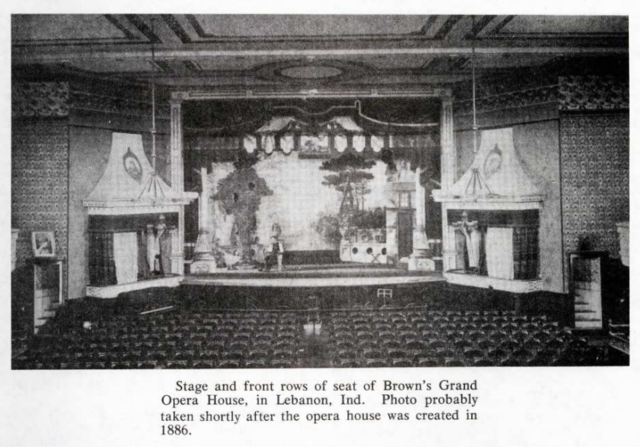 This theater occupied the second and third floors of a large three-story brick building with a mansard roof. It was built in 1886, opening on August 16, 1886 as Brown’s Opera House. By 1892, it had been renamed Grand Opera House.

The theater space had a large scalloped front stage at the rear. The balcony was narrow, with squared off corners, and ran well down the walls toward the stage. By 1902, a staircase had been added to the west side, giving access to the theater, although a central entry still seems to be in use. The ground floor was used as a furniture store. The theater is listed in the 1905 Cahn guide, but no seating capacity is given.

By at least 1914-15, it was showing movies. It was closed in 1918, and the furniture store has expanded to all three floors. The building was still standing in October 1979. Long ago demolished, the site is a parking lot and bank drive-through.

View of the auditorium here: http://www.trestlewood.com/photo/6498/

The 1914-15 Gus Hill guide gives a capacity of 900. From other photos, the building seems to have survived until at least the mid-‘70s. The opera house was apparently opened August 14, 1886.

Here is an item about Brown’s Grand Opera House from the August 17, 1886 issue of The Indianapolis Journal:

“Lebanon, Aug. 16.— Brown’s new opera-house was opened to the public for the first time tonight, the Gilbert Comedy company giving the Inaugural performance to an audience numbering twelve hundred people. The occasion is a notable one, from the fact that the house is one of the handsomest places of amusement in Indiana. The work is, for the most part, that of Indianapolis artisans. The architect is R. P. Daggett. The brick and stone work was done by J. V. Woods, of Indianapolis, and the wood work by George W. Busby, of Lebanon. The decorating was done by Albert Gall, and the carpets and draperies are also from his house. The scenery and drop curtains are from the brush of Frank Cox, of New York. The theater is seated throughout, including the gallery, with folding opera chairs of the latest design, those on the lower floor being upholstered in cardinal plush. The proscenium and party boxes, of which there are ten, are also exquisitely draped and furnished. The house, which is provided with all modern conveniences and accessories, is a model in every respect, and is a monument to the energy and public spirit of J. C. Brown & Cos.”Architect Robert Platt Daggett began practicing at Indianapolis in 1868, and the firm he established with junior partner James B. Lizius in 1880, R. P. Daggett & Company, continued operation after his death in 1915, run first by his son Robert Frost Daggett and then by his grandson Robert Frost Daggett Jr. until the latter’s retirement in 1977. The firm was one of the city’s most prolific, but unfortunately very little of its early work has survived.

The Grand Opera House was still standing at least a late as 1979, when an article about it appeared in the October issue of Boone Magazine (PDF here), though it had not been used as a theater since 1918. It was quite a large theater, with 700 seats on the main floor and 300 in the gallery, with additional seating for 32 in the side boxes. The stage was 38 feet deep and 60 feet wide. I’ve been unable to discover to what extent movies were presented at the Grand, but its inclusion in the 1914-1915 American Motion Picture Directory would have been unlikely had they not been shown fairly often.

The Grand Opera House in Lebanon is listed in the 1897-98 edition of the Julius Cahn Theatrical Guide. J.C. Brown was Mgr. No seating capacity given. Tickets 25 cents to 75 cents. Theatre on second floor. The proscenium opening was 28 feet wide X 30 feet high; the stage was 38 feet deep. There were 8 musicians in the house orchestra. The population of Lebanon was 6,000.