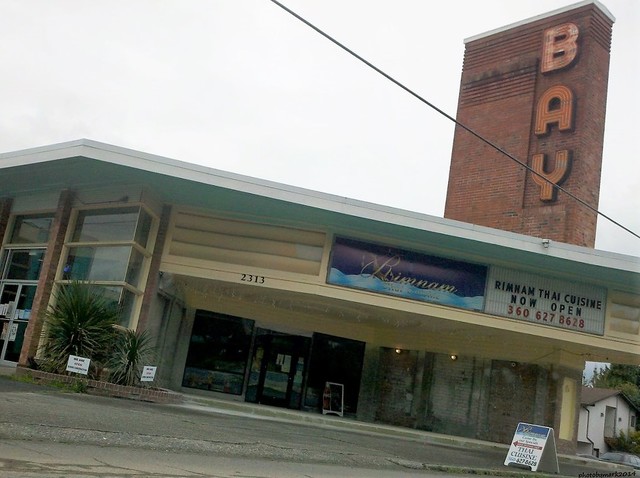 Movies at the Bay Theatre only ran for a few years, it was still open in 1952 but had closed by 1953. It had been sold by the federal government to the city of Bremerton. The city converted the theatre into a bowling alley. A church also met in the building during that time, according to today’s building owner, Chris Campana (purchased from John & Patricia White’s family in 2003).

Forrest Mulnix (Patricia White’s grandfather) purchased the 10-lane alley from the city in 1954, and in 1960 added another 10-lanes in a new wing of the building to the southeast of the property. Bowling in Bremerton was a hot ticket much of that time, with leagues and parties packing the place many nights of the week.

The Bay Bowl was closed as a bowling alley in May 2002. In the mid-2010’s a portion of the building (possibly the lobby) was operated as Rimnam Thai restaurant for a few years. In 2020 the 1960’s addition bowling alley wing is being used as storage space. Much of the rest of the building stands empty and unused and the building is offered (For Sale). It was announced in May 2021 that the building was due to be demolished.

I am sad to report that the old Bay Theater / Bay Bowl building in Bremerton is destined to be demolished. A large apartment building will be built in its place.