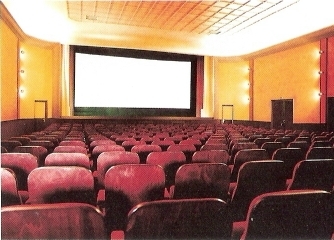 Located in the Haunstetten district to the south of the city center. The 3 Maderlhaus Lichtspiele was opened around 1953. It was operated by Georg Mattes. The FP 6 projectors were by Phillips. In 1961 Ludwig & Emmi Betz took over the operation. It was closed in 1989. It was re-opened in 2003 for a short period of time. It was followed by temporary use as a live theatre.