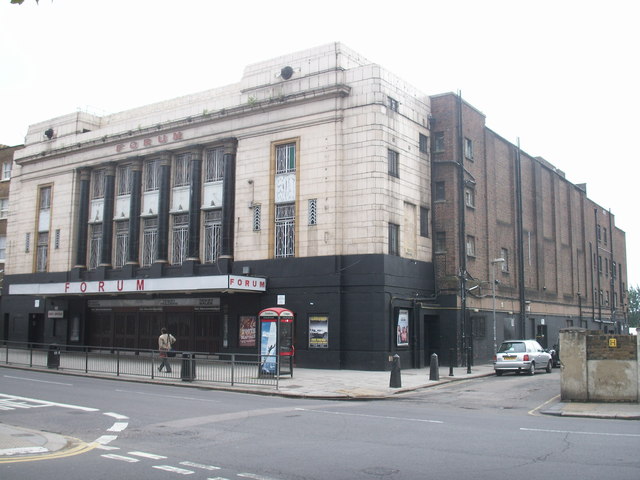 Located in the north London district of Kentish Town. A very similiar in design sister theatre to the Forum Theatre, Ealing which opened the same year (1934). The Kentish Town Forum Theatre was opened 17th December 1934 and seated 2,175 in stalls and single balcony. The architect was J. Stanley Beard and the interior design was by W.R. Bennett. It was taken over in 1935 by Associated British Cinemas(ABC).

Re-named ABC in 1963, it was closed on 18th July 1970. It became first a bingo hall then a ballroom and finally a concert hall/theatre named the Town & Country Club in the 1980’s (I can well remember going to see “The Rocky Horror Picture Show” there - the bouncers on the door were terrifying!). It was closed in March 1993

It returned to it’s original name later in 1993 and was operated by Live Nation as the Forum Theatre. It is now operated by the Academy Music Group as the O2 Forum Kentish Town. It is now a Grade II Listed building.

A recent exterior view of the former Forum Cinema, Kentish Town in North London, now in use as a rock concert venue.
View link

The family resemblance with the former Ealing Forum/ABC/Virgin/UGC is amazing. The Ealing version was tripled some years ago, but is currently being demolished. There were stories doing the rounds that a multiplex is going to replace it – utilising the former frontage – but we must wait and see.

There are plans for films to return to The Forum in the near future when the venue is not booked for concerts.

Opened 17 December 1934 and closed 18 July 1970. The Town and Country Club during the 1980s, survived a redevelopment plan in 1992 but closed March 1993. Later that year Mean Fiddler took on the lease with films of a musical nature returning to the former cinema in 1995 under the Silver Screen Cinema Club banner. The MAMA group took over the lease in 2007 and refurbished the building in 2009 when it became known as the HMV Forum. The current operator is Live Nation, part of the Academy Music Group, which has rebranded the venue the O2 Forum.