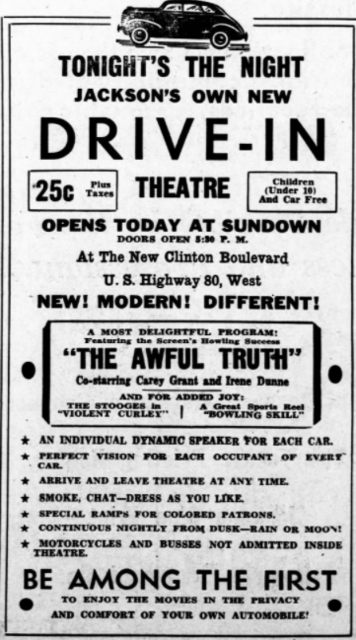 This is the second drive-in built in Jackson, it was opened on October 17, 1941 with Cary Grant in “The Awful Truth”. It was operated by Paramount Richards Theatres Inc, headed by E.V. Richards Jr. It was closed in 1960 following a year presenting special events. It was demolished for I-20. This drive-in was very close to the older Silver Slipper Drive-In that was also on US-80. Nothing remains of the drive-in.

Correction: The Jackson Drive-In is the second oldest drive-in in the Jackson area and in the state of Mississippi behind the Silver Slipper, opening its gates on October 17, 1941 with Cary Grant in the 1937 film “The Awful Truth” along with the Three Stooges short: “Violent Is The Word For Curley” (1938), and a Grantland Rice Sportlight: “Bowling Skill” (1940).

I mistakenly said something while typing this because I thought this is the first but its the second because the nearby Sliver Slipper opened 2 years prior to the Jackson, oops.

Update: The Jackson Drive-In stopped showing films right after the 1959 season. However it was used as a special event in 1960. So it might’ve been closed in 1960.