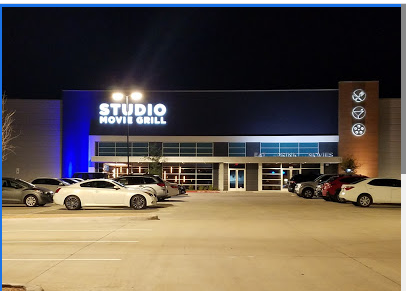 With the opening of Studio Movie Grill’s tenth Texas location in The Shops At Chisholm Trail Ranch on August 28, 2020, there are now 35 locations nationwide.

SMG notes the theater has over 1,200 loungers and recliners in 12 auditoriums. Amenities include 3D, Q-SYS sound systems, a full-service bar and lounge, and American Grill menu. It was closed on January 31, 2021. It reopened on December 24, 2021.

The SMG Chisholm Trail may come back but because of the SMG bankruptcy, it could well be over. If it is a done deal, it opened August 28, 2020 with “Tenet” and a few other films. It closed abruptly on January 31, 2021 after just a five-month run. At opening, it was considered the SMG’s next generation “2.0” prototype venue Two months after opening, however, the circuit filed for bankruptcy during the COVID-19 pandemic that decimated theatrical exhibition. In January of 2021, SMG closed several locations including its DFW locations in Lewisville, Colleyville and the Dallas-based Northwest Highway / former AMC Grand along with locations including Scottsdale, Glendale, Hampton (Virginia), Alpharetta (Georgia), and Copperfield in Houston.

But the Chisholm location sputtered along though closing just two weeks later with four auditoriums in use with “The Croods 2,” “Wonder Woman ‘84,” “The Marksman,” and “News of the World” offered on January 31, 2021. Unlike the permanently closed locations, SMG declared this a “temporary closure”. Notes were posted on the door by the operators about how to get free admission to other SMG locations - none of which were close by. The C-Trail was then removed from the SMG website on March 30, 2021 with the location’s photos and posts removed from its Facebook site - not exactly a ringing endorsement for its 2.0-leaning future.

In reorganization during bankruptcy, the circuit promised the rebirth of this location in late summer or early fall of 2021.