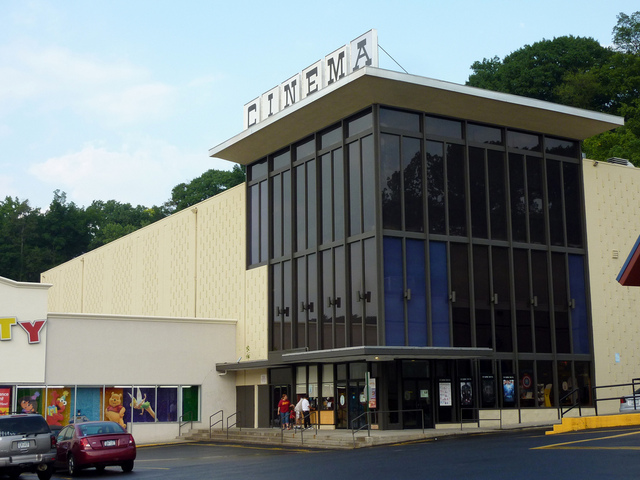 The Central Plaza is a shopping center theatre that was opened by General Cinemas on December 28, 1966 as the Yonkers Cinema with Tony Curtis in “Arrivederci Baby!”. Originally seating 1,700 in the orchestra and balcony, the theatre was twinned, then in 1985 converted into a quad (2 up-250 each, 2 down-600 each). It still features its original GC “CINEMA” sign on the roof, and toward the front of the lobby you can feel that the floor is hollow–it’s covering the original lobby fountain.

RE: Optimist008 – Hudson Mall is currently open despite the revolving door of operators over the years – they’ve have covered to digital.

Western New York is a region where a few GCC locations of various vintages can be found – the most “vintage” of the bunch (all are digital by the way!) are Eastern Hills Mall in Williamsville, NY (including a big auditorium with a shadowbox screen!) and Chautauqua Mall I & II in Jamestown. A few others in Buffalo-Rochester were either of the 80’s vintage or evolved towards that “look” (Movieland 8 – formerly Thruway Mall has quite a history – it’s a GCC of two eras….although sadly its in very rough shape as a very popular discount theater – while I don’t recall it having a shadowbox screen, they still an original giant auditorium that seats about 600!).

I can’t speak for Hudson Mall but one location that has a few GCC touches lurking in a wing (including original style bathrooms) is Starplex Brunswick Square – the auditoriums recently underwent an extensive renovation (I’m not sure if they had a Shadowbox screen and if so it survived several renovations and divisions).

Anybody know what’s happening here? Has it been converted to some other use, demolished or is it just sitting empty?

dave-bronx, lernerproperties.com still has 17.5K of space for lease on their website after another 17.5k was apparently leased or optioned. Heard from a store owner that a gym may occupy part of the theater. GUESSING that a gym could occupy the upstairs as was done with the UA White Plains with another tenant downstairs. The balcony stairway was demolished. Guessing that an ADA compliant elevator will be installed when the property is leased. Got a peek inside months backl and saw what is left of the unearthed lobby waterfall!!!

P.S.—The entire downstairs interior has been fully demolished. Even if the Ridge HIll Cinema did not open, not sure if this theater was still viable or not…Lohud.com reported yesterday that the developer of the former Tarrytown GM property wants to include a movie theater..

Something is going on here. The interior of the building appears to be demolished from the inside out to the outer walls. Basically now a shell.

Party City is moving in – the upstairs does not appear to be used for retail. The exterior walls also got a facelift.

Comfortably Cool, many thanks for posting the ad above and which newspaper site did you get it from please???

With Party City announcing the closure of 45 stores, I wonder how this location will be affected. Personally, it saddened me to see this theater get converted. I remember my sister telling me about the movies she use to catch here when she worked close by. It seemed like such a charming theater.

Please update, theatre went from a twin to a quad in May 1985. Never was a triplex, just was reviewing the Yonkers newspapers online.