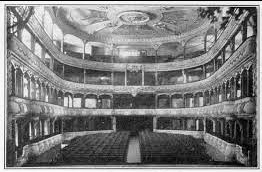 The Alhambra Theatre was opened as a live theatre in 1900 and styled as a European opera house. In 1928 it was re-named Alhambra Cinema and screened Italian, French, Greek, American & British productions. The 1,229 seats were located in stalls 575, first floor 136, balcony level 182 & gallery level 300 with 36 in loges. The projectors were by Century with Ashcroft lamp-house. The Sound system was Western Electric.

The Alhambra Cinema was closed at the end of the 1990’s.