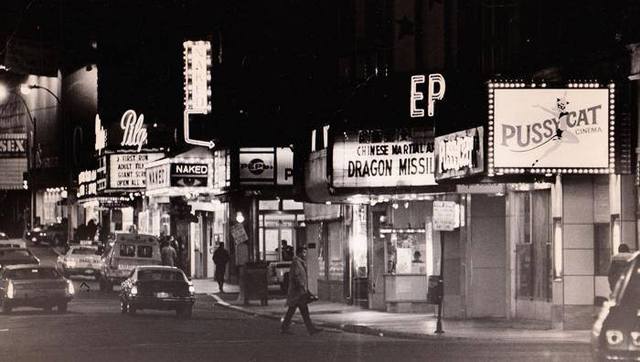 Originally opened as the Unique Theatre, it was renamed Stuart Theatre in 1927. A small unluxurious low-admission theatre that showed double bills of popular and action-type movies for decades. It was located at the beginning of the Washington Street “theatre row”. It later became part of the Pussycat Theatres chain. In recent years it was converted into a MacDonald’s restaurant, which closed in 2015.

I never saw Earthquake at the Saxon but I did take my son there to see Battlestar Galactica in sensurround. I did see Earthquake at shppers world in Framingham and Midway and Rollercoaster in Braintree. In all 3 theatres the speakwers for the rumbling bass were behind the last row of seats and you saw them as you walked in. It didn’t bother me a bit. Framingham was the 1st New England theatre to install sensurround. Sack/USA was too cheap to let Universal install it so they left it up to General Cinema. Sack/Usa didn’t even invest money to fix or clean up there theatres. General Cinema eventually let this happen to them. The neatest chain here was Lockwood&Gordon(no downtown theatres though, only in the suburds. They kept nice theatres until they sold out to Sonderling who let them fall apart.

In a 1918 Boston street directory, this theater is listed as the Unique Theatre, at 700 Washington St. downtown.

hhhmmmm Allyn bet we had some fun there inb the 70’s ;) I used to frequent there MANY afternoons and was NOT in my 50’s :)

Went to the Stuart a few times in the late 50’s and very early 60’s. Always scary. The projrction was fully enclosed then and was on top of the sandwich shop. The projection angle was not straight on but a severe angle shooting right to left causing A keystone effect. I didn;t dare go to the restrooms down front by the screen. I held it all in until after the movies which were almost always a western and a war movie. They only played there for maybe 2 days and the program changed and the theatre was open 24hrs.

The Unique Theatre became the Stuart Theatre in 1927, according to the October 28 issue of Motion Picture News:

“The Unique Theatre, Boston, has been renamed the Stuart Theatre and is under the management of Charles A. Oilman, formerly of the Alhambra Theatre at Quincy, Mass. The theatre has been extensively remodeled.”

An answer to old questions. Earthquake never played the Gary. It played at the Saxon. After that the next Sensurround movie was Battlestar Galactica. Earthquake played at Shoppers World in Framingham for about 3-4 weeks before it came to the Saxon. G>C> Cinema shoppers World was packed all the time for Earthquake. The 2 other Sensurround movies Rollercoaster and Midway played at the G.C. theatres at south shore plaza in Braintree.

The McDonald’s that replaced this theatre has closed.

re Sensurround in Boston The Gary Theater was the only movie theater to feature the gimmick beginning with ‘Earthquake’ and ending with ‘Rollercoaster’ we have pics to prove it https://www.facebook.com/tremontandstuart/ (soon)

Sorry, Tremont &Stuart. YOu are wrong. The Gary never had sensurround. The General Cinema was the 1st area theatre to show Earthquake. Battlestar Gallactica played at the Saxon Then Rollercoastr and Midway played at the General Cinemas in Braintree. They may have also played at rhe Saxon, I don’t recall, but never at the Gary.

The comments about the Gary not having Sensurround are wrong. Towards the end of the lengthy exclusive “Earthquake” run at the GC Framingham, “Earthquake” opened in mid-February 1975 at the Gary in Sensurround and later expanded to several suburban theaters including the Showcase Woburn, also in Sensurround.
Go to the Boston Globe online archives covering issues published during the late winter and early spring of 1975 and you will find many ads for the Gary engagement highlighting the Sensurround system.