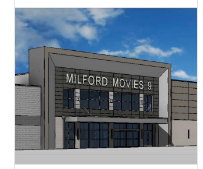 Opened on January 1, 2021 in a repurposed former Walmart.

When repurposing of a portion of the former Walmart/Sitel Building began in December 2019 a Spring 2020 opening was projected. However, because of the Covid pandemic smaller crews had to be used and other obstacles had to be overcome. The resulting venue has heated reclining seats, with adjustable head rests and USB ports to recharge your phone.

From the deleware state news

Long-awaited movie theater opens in Milford Jan 5th, 2021 · by Noah Zucker · Comments: 0 MILFORD — Locals looking to spend time under the flickering light of the silver screen no longer have to drive to Dover or the beach.

“We got it done,” said Milford Movies 9 owner Arthur Helmick. “The community had been asking and asking. I kind of told everybody by the end of the year, we’d have it one way or the other, so I had to perform.”

On the evening of Dec. 30, the nine-screen multiplex on U.S. 113 opened its doors for a soft launch. On the last day of the year, it began selling tickets online.

Sven Johnson, the facility’s current general manager, said its busiest hours have been over the weekend.

Mr. Johnson said there are three ways to buy tickets: on Fandango, a third-party electronic ticket distributor, on the milfordmovies9.com website or in person at the box office.

“The one big thing is we only charge a dollar internet fee for ours. Fandango fluctuates somewhere between $1.50 and $2 for their website,” he said.

To buy tickets in person at the box office, there’s no additional charge. They cost $9.50 for adults and $8.50 for kids, but are only $6 on the theater’s discount Tuesdays.

Right now, Mr. Johnson said the theater is showing a number of films, including “The Croods: A New Age,” “News of the World” and “Wonder Woman 1984.”

Jo Schmeiser, the executive director of the Greater Milford Chamber of Commerce, went to see “Wonder Woman” on Saturday night.

“It was a wonderful experience,” she said. Ms. Schmeiser liked being able to buy her tickets online, which she said made social distancing easier.

She also enjoyed the “reclining and heated seats,” which she described as her “favorite.”

Mr. Helmick said Ms. Schmeiser is not the only community member excited about all the amenities packed into his new business.

“They’re loving it,” he said. “The best comments so far have been about the seats. These are state-of-the-art seats.”

Mr. Helmick said these full recliners also have “an independent headrest adjustment, which recliners don’t normally have.” In addition to their adjustable personal heat settings, he said the seats also have “USB ports, so you can charge your phone.”

The theater has taken many precautions to ensure that visitors are safe in spite of the raging pandemic.

“Social distancing, shields, masks” are required for employees, Mr. Helmick said. Employees also have their temperatures taken when they come into work.

“We always wore gloves anyway to handle food and things like that, so that wasn’t much of a change for us,” said Mr. Helmick, who also owns Westown Movies in Middletown.

He anticipates that once the pandemic passes, 400,000 people will come to the movies every year.

“Having a business providing entertainment for all ages, like a movie theater, will bring customers to other local businesses, which, in turn, helps the whole community,” Ms. Schmeiser said.

“People seem to like to multitask when venturing out, so having local restaurants and other shopping opportunities nearby is an asset,” she said.

This might be part of the reason some city leaders were so eager to have the theater built.

“The mayor, Archie (Campbell), has been great,” Mr. Helmick said. “He cares about his community, and he’s put his backing with us.”

Mr. Helmick expects the theater to be a boon to locals looking to socialize, as well.

“I expect to walk into that lobby and see people stop and chat with each other who haven’t seen each other in months or sometimes years,” he said.

“We’re not a big chain. We’re not a Regal or an AMC,” Mr. Helmick said. “We’re really the community theater. This is a theater for that community.”