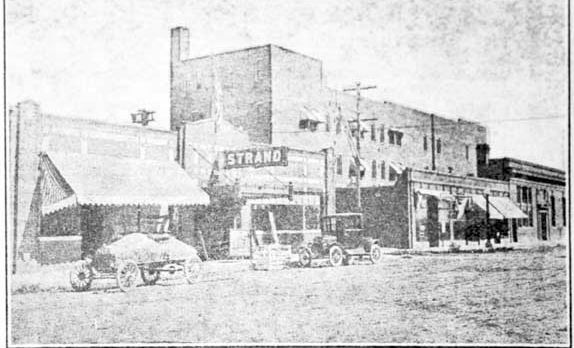 The Strand Theatre was opened prior to 1926. It was still open in 1929, but had closed by 1931, possibley still a silent movie theatre.

The Strand was located on First Avenue. I’ve uploaded a postcard image from 1920.

I’ve found the Strand mentioned twice in theater industry trade journals in 1922. The house changed hands that year, passing from C. L. Harvey to the partnership of Krone and MacArdle.

The tall building in the background of the photo of the Strand once housed the Royal Theatre. As the back of it looks like a stage house, I think it might have housed a theater earlier than the Royal, which supposedly opened in the early 1930s. The building might have been the Odeon, which was in operation by 1914, or the Casino, which was in operation by 1917, and those two might have been sequential names of the same house.