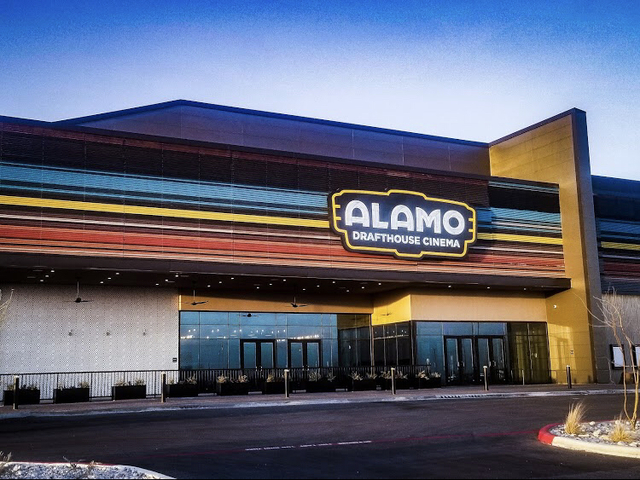 Quick-growing East El Paso received two announcements of new movie theaters, one by Cinemark announced in 2019 and the other a franchise of the Alamo Drafthouse announced late in 2018. Though the Alamo Drafthouse East El Paso did open with a soft launch on March 26, 2021 and a formal Grand Opening March 31, 2021 to coincide with the film, “Godzilla v. King Kong,” that on-screen battle was not even as epic as the Drafthouse’s actual path to opening.

The theater was part of Monteverde, an ambitious 30-acre mixed-use development at Loop 375 and Pellicano Drive on El Paso’s east side. The dominant player in the El Paso movie marketplace was Cinemark. Once Alamo’s location was announced, Cinemark predictably countered with a new East El Paso project of its own in 2019. The Cinemark v. Alamo Drafthouse battle was dwarfed by the COVID-19 pandemic that hit early in 2020.

Construction on the Alamo Drafthouse began in February of 2020. And then the world changed. Just weeks later, the chain joined all of the other movie circuits in suspending exhibition operations on March 16, 2020. Additionally, Cinemark halted all movement on its proposed East El Paso location.

Alamo was already too far in to its project so just kept building the East El Paso facility to the plans of 5G Studio Collaborative. That included the 10-screen, 1,000 recliner moviehouse with its Lucha Libre themed interior and exterior accents along with a full bar and kitchen. Just prior to its official November 2020 launch, Hollywood was pushing back virtually all of its holiday releases to 2021 or releasing them on streaming services. Alamo, which had reopened some of its locations, reversed course and suspended exhibition.

To complicate matters, Alamo Drafthouse next declared bankruptcy on March 3, 2021 permanently closing three of its locations in addition to others it had let go prior to the bankruptcy. But the East El Paso theatre project didn’t stop and launched later that month for Triple Tap Ventures, LLC. Triple Tap also operated the 2016-opened Alamo Drafthouse Monticello in West El Paso location as well as the Houston and Lubbock Alamo franchises.

The East El Paso auditoriums had 4K projection and it large format theater, “The Big Show,” that had Dolby Atmos sound. 1976 King Kong would have been proud as his 55' height matched the “Big Show’s” 60' screen height. The 2021 characters were much taller so had to be scaled to the screen’s dimensions on opening day.