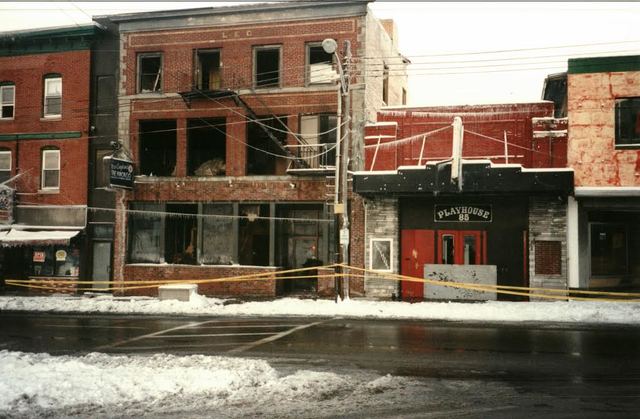 This is from Boxoffice magazine in August 1962:

WEST WARWICK, R.I.-The former Palace Theater on Washington Street, Arctic, closed as a motion picture house more than two years ago, has been purchased by Harry Erinakes and his wife Irene. Erinakes owns and operates the Hilltop Drive-In and the Lonsdale Drive-In, in addition to the Redwood Bowling Alley on Crawford Street in Arctic. He has not announced his plans for the new property.

In September 1926, this theatre was part of the eleven-theatre Celebrate Paramount Week.
Newspaper ad.

This theatre was part of the September 1923 6th Paramount Week. In this advertisement from the (Providence) Evening Tribune, September 1, 1923, we see a fascinating list of Rhode Island area theatres, many long-gone and long-forgoten, or even unheard of, as well as what they were showing during that week. The Palace was showing The Go Getter. CLICK HERE and move image to see all theatres.

A NEWSPAPER AD for Arctic area theatres from September 6, 1925.

Good old days I worked there until they closed I think it was 1995 then a few years later it burnt down owell had a blast.

Here is a good story about the Palace Theatre! I was doing some research! This will help out everyone so this is why I’m writing this! I am a historian! On October 17, 1921, the Palace opened. Silent movies with accompanying music from a house organ was the attraction. That was the scope of entertainment in West Warwick for awhile, until the advent of the “talkies” talking movie pictures in the 1920’s.

The property of the theatre at 85 Washington Street in the Arctic village of the City of Warwick was owned by Henry McMann and when the City of Warwick split due to politics, a new town called West Warwick was incorporated in 1913. McMann sold the building to Mary and Coit Carson in 1926, who sold it to Harry and Irene Erinakes in 1962,but it was closed for a few years before 1962.

With the advance of technology and the passage of time, however, the movie house went through several changes. Technicolor films were on the program, with both the features film and cartoons being in color. Newsreels became and important sideshows.

Giveaways like depression glass dinner ware was popular with the Palace patrons for several years. They gave away the gold colored depression dinner ware a lot. My grandmother had the entire set. Plates, glasses, salt & pepper shakers, coffee cups etc. and other give away items drew in the crowds in to the Palace when times were tough during the great depression of the 1930’s.

Until the 25th anniversary in 1946, the theatre opened for two shows a day. Afterwards, there were continuous show runs.

The theatre was also popular for charity organizations to raise money by placing containers in the lobby and passing the hat at intermission time.

A major renovation took place for its 25 anniversary in 1946. New red velvet comfortable seats and lighting were installed and the “Voice of the Theatre”, the latest in sound equipment was installed. A $12,000 Pope Jones Concert organ was set up near the stage. The organ was something used for special performances, such as beauty contests and other nice events. Erinakes liked his “G' rated and family oriented movies in his house and so did the general public who lived in the Pawtuxet Valley.

In 1973 or 74 Harry Erinakes retired and sold the Theatre business and it became and embarrassment to the community. The new owners John. J. Tavone and Alexander M. Longo took over the ownership from the Erinakes. It was the Palace Theatre (Rhode Island Films)when they took over, and “X” rated movies were introduced to the town for the first time. They tried belly dancing shows, wet tee-shirt contests, strip tease acts and even tried providing the community with Disco music and dancing which was popular during the 1970’s. They also tried to please the public by showing some “G” rated movies also during special times. In 1989, according to the Pawtuxet Valley Business directory it reads as follows: Palace Theatre – John Tavon Manager, Night Club and Bar. The town council, the local police, church groups and individuals tried in vain to prevent the “X' rated moves and strippers from doing their thing!

Police said they met up against supreme court ruling every time. The police in eight minutes did what they, the town council and others have tried to do for three years, since the skin flicks came into town during the 1970’s. The Police closed the Palace theatre.

The Palace Theatre changed its name to the Play House and everything started all over again sometimes during the 1990’s. I’m still trying to do more research on this subject, but I think the Play House closed around 1995 and a couple years later the building caught on fire. It was a total loss. The building was torn down and made into a parking lot for the Hong Kong Restaurant that was located a couple of doors down! A very popular restaurant for more than 60 years and I ate there yesterday! Many people were happy to see the Play House go up in flames!

In 1975 just about every day the Palace Theater was in the newspaper headlines again with very bad publicity from and many residence signed partitions to close the place down. What a major battles. What hurt the Strip club was there was a Catholic Church and school St. John the Baptist Church located across the street and about 300 yards away from the strip club and many people did not like that! I have many of the newspaper articles if you wish to read some. You can email me at bg-civilwar@ verizon.net.

At one time there were 6 opera houses or movie theatres in the Pawtuxet Valley. Now they are all gone and basically the town has fallen on hard times and West Warwick is almost a ghost town. There is a new committee trying to bring back the town to life.

So here is some history for you and I hope that you enjoyed this moment in time which is now part of the history of West Warwick! I’m not rooting for the “Good Guys” or the “Bad Guys” in this article. I am a researcher and historian, just collecting information for you, the people who loves these theatre topics!

If you know more tell us, I’d love to learn more! Brian

PHOTO OF PALACE THEATRE IN 1941 MGM REPORT Thanks to Theatre Historical Society of America.