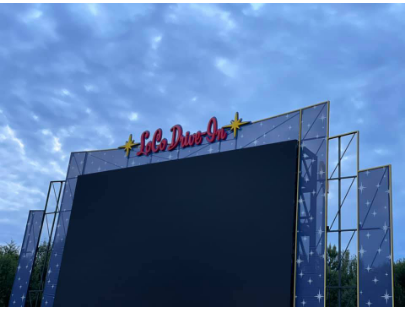 Described by the Knoxville News Sentinel as bringing drive-in movies into the 21st Century, the LoCo Drive-In opened July 2, 2021, by Gordon Whitener of the Whitener Company and Loudon Entertainment LLC.

No projector is needed, instead a Samsung video board supplies a 35x63 4K LED image viewable even in the daytime. It takes its output from Blu-ray, Direct TV, streaming and a digital hard drive, with sound provided by FM radio and external speakers.

Appropriately for a drive-in, “Smokey And The Bandit” along with “Days Of Thunder” showed the first weekend. Coming up were “Raiders Of The Lost Ark”, “Back To The Future” and “E.T. The Extra-terrestrial”. First-run films were scheduled for later in the summer. There are church services on Sunday morning with sporting events and concerts planned.

The theatre has a playground and the food is supplied by a Pilot Flying J concession stand and food trucks.

Uploaded a photo of the LED screen from the LoCo Facebook page. Capacity is said to be 400 cars.