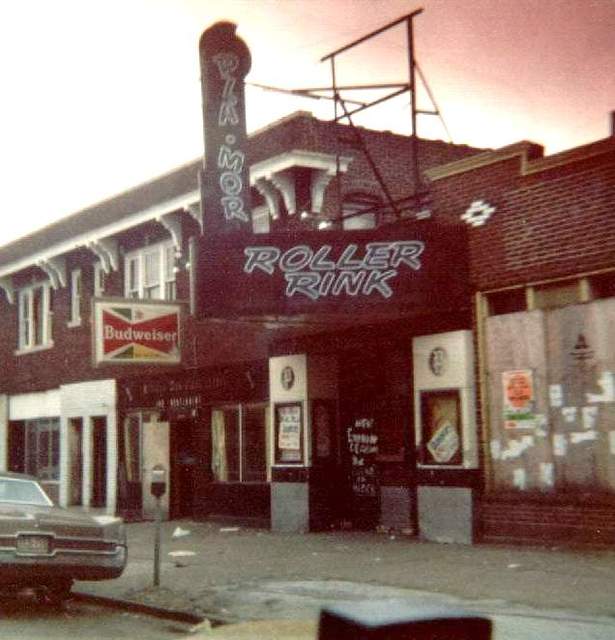 The Palm Theatre was a neighborhood theatre opened on May 15, 1926 seating 901 by the Komm Theatre chain. A single story theatre with a small lobby and the ticket booth located on the side of the theatre. A small marquee with a tiled front facade was not the ordinary decor for a Komm theatre.

A single aisle running down the middle of the auditorium with a large clock above the center of the screen. The walls of the theatre were wallpapered with a floral leaf and the seats had no cushions of them at all, they were wood both seat and back. The Palm Theatre closed quietly on January 6, 1953 after going to week-end only operations for its last seven years. It became a bowling alley and was demolished in 1965.

Operated from 1926 to 1953. Converted to a bowling alley. Since demolished…and not for a parking lot. Owner was Harry Londoff.

The Palm was not demolished for a parking lot. The old GM plant is quite a distance away, blocks to highway 70, then blocks down to Natural Bridge.

The “Roller Rink” and “Pla-Mor” letters were long gone—scavenged along with the Budweiser sign sometime after the above picture was taken. With only skeletans and ruins of things left as children and teenagers we felt like we were in the movie “Logan’s Run” and tried to figure out what was once there. There was such a big sidewalk out fron you knew something had been there once.

The ancient black paint on the vertical sign under where the letters were attached was extremely faded tp a dark dirty black gray and the other paint was very worn—-the contrast between the two colors of old black paint showed the outline of “PLAY MOR.”

I thought it was an old bar like the place next door. There was a large amount of jagged glass everywhere and heavy like barbed wire in the windows on each side of the door where the white signs are located in the pictures. I reached my hand in to touch the barb wire—the glass was caved in and it was boarded up from behind. I touched what was left of it at that time.

Another Londoff vacant bowling alley existed, maybe owned by the same people, east of Fairgrounds park down Natural Bridge, going toward Parnell(maybe part of Old North St. Louis) towards downtown. I do not know if it previously was a theatre. I never saw it open, we just saw again the outline of words on old signs. Maybe it was the same family of Londoff Chevrolet fame.