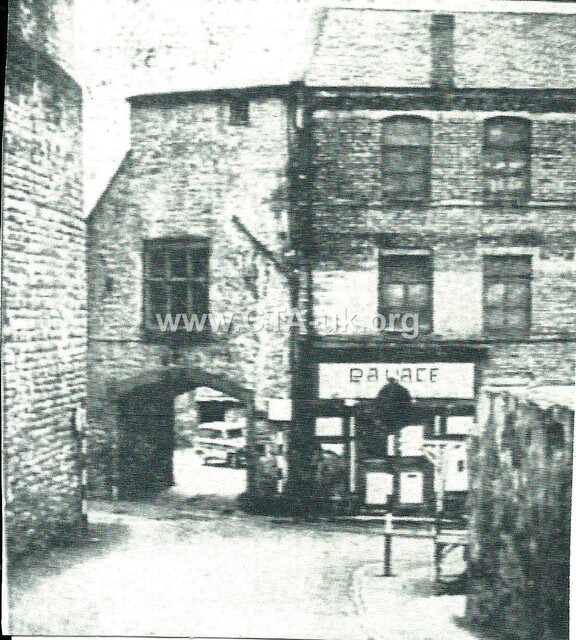 In Durham, Co. Durham, a music hall called The Palace was opened on 9th August 1909, in an existing building previously used as a wool warehouse, on Back Lane, off Walkergate. Designed by architect H.T. Gradon of Durham, seating was provided for 800, with 500 in the pit & pit stalls and 300 in the circle. The proscenium was 22ft wide, with the stage 25ft deep. It was operated by Ted C. Rawes. Although primarily a live venue, films formed part of the entertainments on offer from the outset projected on the Cathedoscope, the first film screened was “William’s Suicide” followed by “Nick Carter, Detective” and, indeed, the Palace Cinema was listed in the 1912 Bioscope Annual and Trades Directory.

At that time, it was owned by J. J. Cottrell, and advertised “pictures and variety”. The seating capacity was shown as 800.

By the 1914 Kinematograph Year Book, and the seating capacity had reduced slightly, to 760. Into the 1920’s, his company, Rawes Entertainments Company Ltd. was listed as the proprietor, with Mr Rawes as the resident manager. By this time, it is assumed, the venue had become a full-time cinema.

The Palace Cinema appears to have been a late convert to sound, with an RCA system first being mentioned in the 1935 Kinematograph Year Book (although this could also have been a result of late reporting!). Seating was by then for 750, shows were twice nightly and there were two changes of programme each week.

After World War II the Palace Cinema was acquired by the Essoldo circuit: that company is first mentioned as proprietor in the Kinematograph Year Book for 1949. Some alterations were carried out, possibly including the installation of a ‘panoramic’ screen that, whilst larger, could not, it seems, be advertised as “CinemaScope”, and the seating capacity was reduced to 508.

The Palace Cinema closed on Saturday 1st February 1964 with a horror double bill: “The Pit and the Pendulum”, starring Vincent Price, and Ray Milland in “The Premature Burial”.

Closure appears to have come along unexpectedly; apparently films (titles not known) had been announced for the next day. (One theory is that this prevented any possible vandalism!).

The building was demolished to make way for city centre road improvements. It appears that “Back Lane” was completely lost at this time.