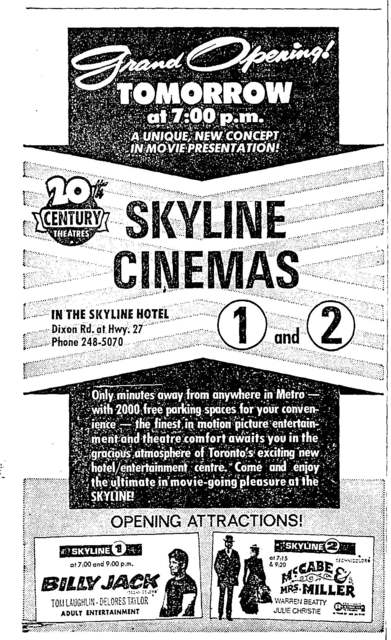 The theatre was located at the bottom of the Skyline Hotel near the airport in Toronto.

The space occupied by the theatres is now a nightclub. Sorry can’t remember the name. Very close to the former Skyline hotel (now called the International Plaza) was a six or eight plex which is also closed. The entire space of that multi-plex is now occupied by a very popular Montreal based steak house called Le Bifteck

The official address was 655 Dixon Road

I worked on a 2001 straight-to-video movie shot there (True Blue, with Tom Berenger) for some scenes in the larger auditorium which was dressed up as a fetish club. My first and only time there, but the only traces of its previous incarnation are the stage platforms where the screens once were. The projection booths have been converted into washrooms, with multi-coloured tinted square windows overlooking the action.