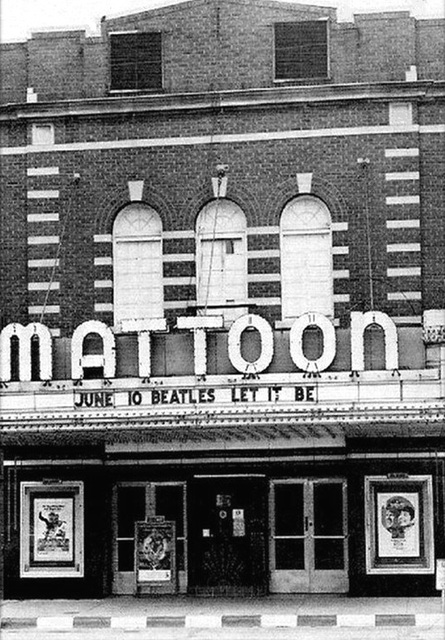 The first Mattoon Theatre was built in 1896 at Prairie Avenue and N. 20th Street (and has its own page on Cinema Treasures).

In 1921, a new Mattoon Theatre was built at 1421 Broadway by George Kizer. It showed movies primarily, though also hosted live entertainment as well for some years. In the 1930’s, it, along with the Clarke and Time Theaters, Mattoon’s other main movie houses, became part of the Frisina Amusements chain.

In its later years, the Mattoon Theater was called the Twin City Theater from May 12, 1978, and after being triplexed on June 30, 1980 and renamed the Cinema 3. It was part of the Kerasotes chain for many years. The theater was shuttered in 1996, no doubt in large part due to Kerasotes' opening of the new Showplace 8 in Mattoon.

The Mattoon Theater was demolished in the late-1990’s.

While in high school during the mid-1970s, I worked at the Mattoon Theatre, Times Theatre, and Skyway Drive-In in Mattoon when they were all owned and operated by Frisina. Really liked working at all three.

Two different houses called the Mattoon Theatre are conflated in the current description for this theater. The 1920s section of a time line of Mattoon History has this item: “1921 – George Kizer builds Mattoon Theater for motion pictures at 1421 Broadway.”

The 1910s section of the same time line says that the original Mattoon Theatre, which was at 20th and Prairie, was destroyed by a fire in 1916. That house at 2000 Prairie was the one built in 1896 and designed by Charles Mitchell.

This opened on October 31st, 1921 as Mattoon. Grand opening ad in the photo section.