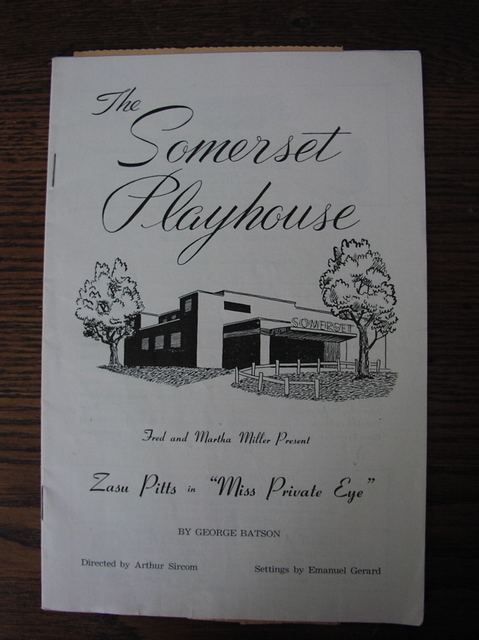 In a 1983 article in the Fall River Herald (August 20), the manager wrote of this theatre.

“At the Somerset Playhouse, the boiler room was located under the stage. The boiler room itself was built over a spring, which necessitated a pump working all the time. When the pump would go into action, it would make a noisy click quite audible to the performers on stage. One week we had a star whose image was angelic and demure, just sugary sweetness itself. Off stage she was just the opposite, a tough cookie from the word go, who possessed a colorful vocabulary laced with four-letter words.

“One night during a performance, the pump clicked into operation. Its noise took Miss Goody Two Shoes by surprise. She let out with a loud, ‘What the…was that?’ A vulgarism completely out of character with her projected pose of innocence. The expression stunned the audience into silence. They didn’t even laugh, it took them so much by surprise. That outburst ruined the evening’s proceedings. The audience just wouldn’t buy her brand of goodness after that gaffe.

“The lavatories at the Somerset were located almost on the stage. Actors had to be warned not to use them during a performance, because the flush could be heard in the audience. This situation prompted one star to comment, ‘This is the only theatre in the United States where the bathrooms are on the stage.’ Only she expressed it in more pungent terms.

“The air conditioning at Somerset could not be used during a performance as the cooling unit was also in the boiler room, and when operating, the actors could not hear each other talk. And the boiler room did not have an inside entrance, just an outside one.”

There is a small website which I will be hoping to update even further with more information. I am going to be speaking with the woman who was associated with the theatre.. I think her position was some kind of administrative assistant. here is the link to the site: http://www.somersetplayhouse.com

I’ve tried to e-mail the Somerset Playhouse site but can’t seem to get through.

I was a staff member of the theatre during the summer of 1951 and can provide information on that season if anyone’s interested.

Mr. DeLuca’s notes on the theatre are quite accurate.

I can be reached at

“Motion pictures, with program changes three times weekly, on Sunday, Wednesday and Thursday, are being shown at Nathan Yamins' Somerset Playhouse, which housed stock companies during the summer. Doors open at 7 P.M. and the showing starts at 7:30. Admissions are: Adults, 42 cents, plus 8 cents tax; children 17 cents, plus 3 cents tax. Saturday afternoon matinees are held at 2 p.m. Scarley Lady chinaware was given to woman patrons at the opening. The offer was repeated later. James Knight, who managed both the Strand and Embassy [in Fall River] and who has been acting as relief manager since the closing of the Embassy, is the playhouse’s new manager. Phyllis G. Davis is in the boxoffice.”

I agree with Mr. Morgan about the theatre’s construction. I believe the Playhouse was built in the mid to late-40s.
However, so far as I know, Gertrude Lawrence did not appear at the Somerset Playhouse. I was a member of the cast when Paula Lawrence did a musical there in the summer of 1951 “A Connecticut Yankee."
Another interesting musical presented that summer that could be added to Mr. DeLuca’s list had a young Bob Fosse as the lead in "Pal Joey” opposite veteran movie actress Carol Bruce. This and other musicals (“Brigadoon,” etc.) were packaged for the summer circuit by Gus Schirmer, Jr.

Nothing left now except the echoes of distant memories.

I believe the theatre first opened on July 3, 1950 with the play “Harvey” starring James Dunn.

UPDATE: Should also be listed as “Somerset Playhouse.”