Link to their Spring 2021 newsletter:

Highlights: Construction continuing, primarily on electrical, HVAC, etc. and continued excavation of the basement into the crawlspace. The roof will be removed and replaced over the summer of 2021 (So it’s probably done by now).

Hi, Patsy and other members. I emailed the powers that be and offered the gift of a Barton Theatre Organ for the restoration. I was told that the renovation plans do not include the re-installation of a pipe organ. As I understand, the Theatre originally had a Barton. If anyone has any questions they can contact me directly.

Thank you ncmark. Hope to see photos. My email is

Today’s Charlotte Observer reports that construction on the theater continues despite the hotel tower being put on hold indefinitely. The steel framework is completed for the first few floors that will hold the lobby and administrative offices. Completion is expected in late 2022. Picture added of the framework as of April 2021.

Work continues on the theater but hotel construction has been put on hold. Not canceled but delayed indefinitely due to Pandemic uncertainties. Most recent estimates for the theater completion is fall of 2022.

Another update - their Fall 2020 newsletter. Construction continues, on many fronts including lobby tower, stagehouse infrastructure and more.

A great asset and a very long time coming.

It has been a long time since I posted anything,also,Patsy. That this project is going forward,will be a great asset to Charlotte .

Sorry if the link I just posted is not in blue to simply tap on it. It is worth reading. Can’t tell you how pleased I am to see this theatre finally being restored in downtown Charlotte! When I moved to Charlotte in 2003 I knew that it had been quite the theatre in its heyday and that it was worth saving. Thank goodness it was never demolished then and is now being restored for future generations. There were many Carolina Theatres throughout NC and many are listed as closed. Such a shame. I haven’t posted on CT for quite awhile though feel it is time to start posting again on a site that is close to my heart. Thank you Ross for creating CT for all of us theatre buffs. Btw, I hope to have a theatre exhibit in September in remembrance of my hometown theatre, the Grand in Westfield NY though COVID may require changes in the plan. The Grand is listed on CT. Check it out.

Music to my ears! Btw, this theatre should now be marked as renovating and not closed.

According to the Spring 2020 newsletter:

What is the latest? 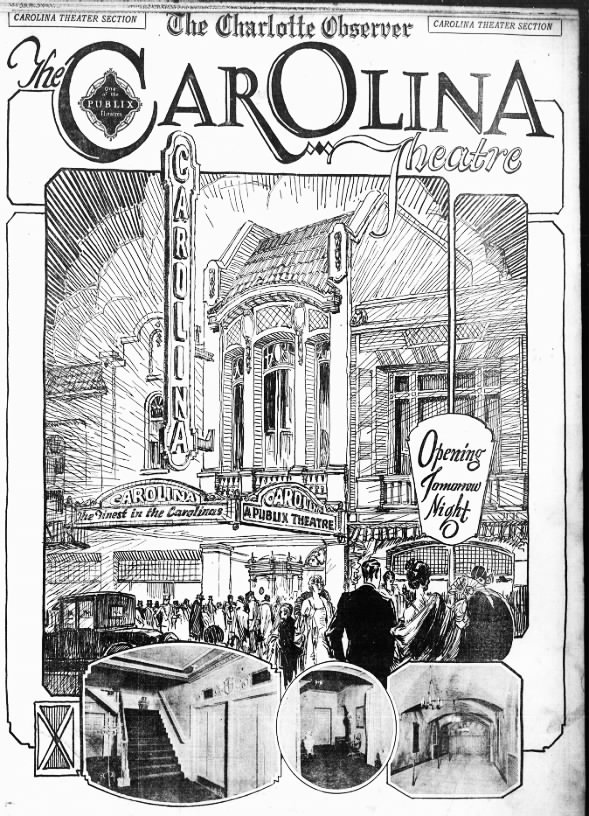 Music to my ears.

The construction crane is being erected for the 34 story high rise hotel going over the lobby area. Target dates for completion: Fall 2021 for the theater and spring 2022 for the Intercontinental Hotel.

The construction fence is up around the theater and work has begun on the renovation.

The Foundation for the Carolinas announced that construction will start on the Carolina Theatre in May and that a 20 story hotel will be built atop the vacant land of the former lobby area. The budget has grown to $42 million.

I photographed the Carolina last year. Check out a short write up and some images at After the Final Curtain.

Any restoration updates would be greatly appreciated.

Too bad other than the 2001: a space odyssey ad, there are no other ads or pictures of the theatre when it was a Cinerama theatre from 1961 to 1969. I would love to add them to my list of Cinerama theatres – http://incinerama.com/ctcineramatheatres.htm

I got to tour this theater during the initial phase of restoration fundraising, which I could swear was during Springfest in the early-mid 90s (do they do Springfest in Charlotte anymore?). It was very surreal – the entire lobby corridor was gone. The main entrance to the auditorium was set back from North Tryon with the space between where the old marquis was and the auditorium door just an open-air area. The auditorium itself was decrepit and stunning at the same time. I’m assuming the structure itself was sound, but it was like walking through a building that had been burned out – dark, dingy, but fascinating nonetheless. I’m glad to hear it’s being restored. I worked at several theaters in Charlotte and frequented many others in the 70s, 80s, and 90s – most all have been torn down. It seems that there could be some positive use for these old auditoriums, but that can’t always be the case.

spectrum: Can’t seem to download the first link. Is it correctly given?

Their press release from Dec. 2015 indicates restoration will start in 2016 with the opening tentatively in 2018.