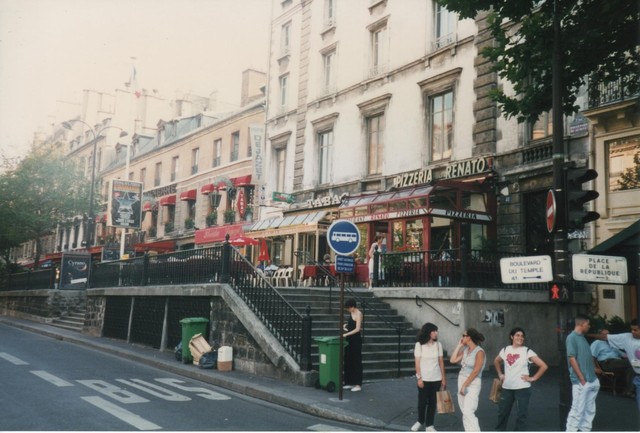 The Dejazet Theatre has an interesting story but only one part concerns the picture show.

Built in 1770 as a theatre in a building of a “Jeu de Paume”, it is the only theatre left after Baron Hausmann’s great remodeling of Paris at the end of the 19th century when almost ten theatres of the Boulevard du Crime were torn down.

The same family was running the theatre from 1887 to 1939 when the theatre was converted to movies as a neighbourood movie house. Dejazet is the name of a famous French actress who ran the theatre around 1859 and the name was still used for the cinema. The building an Italian-style theatre with two balconies left in their original design after a projection booth was added at the rear of the second balcony replacing the second floor lobby.

The stage and wings remained without a major change and boxes remained in the auditorium. In the 1960’s the owner had the terrible idea to refurbish and rename the place the France, but worse he was planning to destroy the beautiful theatre and build a brand new place copying the theatre on the cruise ship the France. Fortunately, the architects had forbidden the project.

But the stage was destroyed in order to give more space for a 70mm screen and the ceiling lowered for a better sterophonic sound. Actually, few 70mm prints were shown: “My Fair Lady” for instance.

After a second run policy the France needed to increase attendance so a new formula was found with two movies for the same price (unusual in France) and gave a future to the place.

In 1976 a fashion designer bought the Dejazet restored its old name again and alternated live shows and cinema. It became the only movie theatre open from morning till evening. It became such a rough place that the police closed the cinema in 1982.

After rumors of conversion to retail shop a clown company took the control of the Dejazet which returned to live theatre as the Theatre Dejazet. The stage and the orchestra pit were ehanced and once a silent movie was projected with live music.

Since then many varied live shows and plays gave to the Dejazet a name again among Paris’s show places, where the first “operette” (French name for musical) was created in the last century.

In 2004 the Theatre Dejazet is still hidden behind its small 19th century facade but remains one of the oldest theatres of Paris with its restored original and charming design. The projection booth has now been removed; movie time is over.