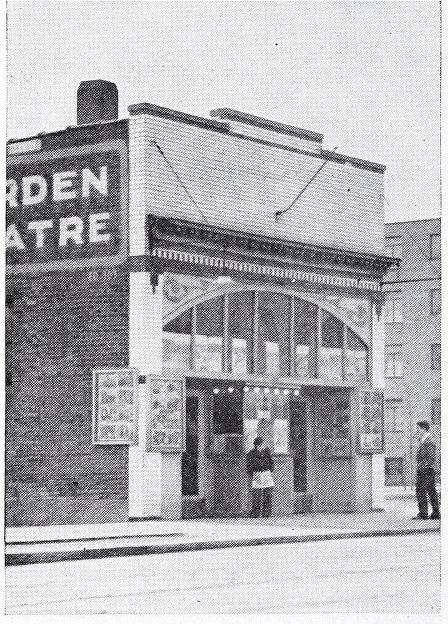 The Garden Theater was on W. Taylor Street near S. Racine Avenue, in the Little Italy neighborhood (which, much reduced from its original size, is surrounded by the University of Illinois at Chicago). I went there as a kid in the early-1950’s. Saturday double feature matinees were about 15 cents. I’m sure it was demolished in the early-1960’s.

Jazz Age Chicago shows the Garden on Taylor with a capacity of 299. It shows another Garden on Marshfield with a 1077 capacity.

No opening date was given for this theater. It was listed in the 1953 Chicago yellow pages, with a phone number of MOnro 6-0999.

I attended the Garden Theater throughout the 1940s and 1950s when I lived at 829 S. Morgan Street in the “old Neighborhood”. Oh how we used to cheer on our favorite western heroes – Roy Rogers and Sunset Carson and the rest. I remember that if you were sometimes a few cents shy of the admission price, the nice lady in the box office would sometimes overlook it and give you a ticket. I remember the “Late Checks” that were used to prevent you from staying for more than one showing of the movies and cartoons. It was a real neighborhood theater.

Other theaters in the area that we used were: The American on Ashland, The Century on Madison, The Star and Garter on Madison and the Villa on Halsted. Those were the days!

I lived right across the street from the Garden Theatre until 1951. It was owned by two Italian men (old, I thought at the time). I now believe that it was named after the major opera diva of the time, Mary Garden. I’d go there to see the cowboy double features. Also, there was a basketball court on one side which is where I got to first play and a cinder strewn baseball field on the other side extending to Racine.

The theatre was mostly surrounded by the Jane Adams housing projects with only the Racine Street side being part of ‘Little Italy’ (which in the day wasn’t called that). Taylor St had its own street car line and was the boundry for the segregation of the projects with the Garden actually being on the African American side. The theatre itself was segregated. I remember there was once a sit-in (unknown of at the time) where it was filled up with AAs. I don’t remember how it all got settled.

For those interested in this part of the area’s history an AA couple (Tina and Rocky) with two children did move in to my building, but not my entrance, in about 1949-50. They had all of their windows broken the first night they moved in and the police were there every night for about a year, I think.

Owned by the Garripo family in 1937 per their granddaughter.