Started my working life at these theatres back on July 14, 1978. They hired me to work “The Swarm” at Cinemas 3 & 4. Two weeks later, they transferred me downstairs to Cinema 1 for “Hooper”. Actually worked at Cinemas 5-8 before hanging up the ‘ticket taker" job for good. Lots of fond memories of these Dayton Mall movie theatres.

I will never forget seeing the original Superman in 1979 there. A few years later in 1985, we went to see a sneak preview of Back to the Future there. It was packed and people laughed and cheered together. (the crowd stood up and cheered when Dad McFly punched out Biff) It was the best movie experience I will ever have.

Dayton Mall 2 opened on 8/4/1972 with BUTTERFLIES ARE FREE. There were 70mm screenings in this theatre. 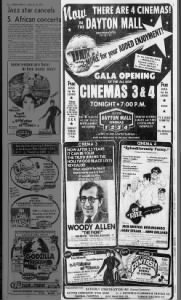 This opened on December 25th, 1969 with one 70MM screen. Grand opening ad in the photo section.

I worked at these theatres for several years, in the 80s, remember them fondly. Was there for the opening of the 5-8 theaters in the back, remember hiding mop buckets as people were walking in (construction and cleanup was going on right til showtime). No pool on roof, although I remember going up there with one of the Chakere’s managers to check the AC when Cinema 1 got hot one nite. Remember Rocky III was a monster, theaters 3 and 4 both ran nonstop for weeks, never not full, Empire Strkes back was an all Summer beast…

Thanks. It would be nice if someone could find pictures of the Page Manor in the day.

Nope. It was Chakeres. Century opened Page Manor as its only venture in Dayton which they operated shortly handing the to Holiday Amusements in Cincinnati.

Was this not the theater that was originally operated by Century? I remember seeing an ad for Century’s Dayton. And if so was it the Century chain from New York rather than the west coast one?

I worked there and loved it. I was 19 yrs old. I worked there when the original Star Wars were re-released in ‘97 and that was so much fun and really exciting! You wouldn’t believe how many weeks Titanic ran there in theatre 1. I understand now why it’s never been turned into a store. It’s storage. Such a shame! why oh why. My lovely friend Theatre 1 you are missed and still loved.

not entirely sure, but i thought Cinema 1 was opened in 1971 with “Hello Dolly”. Cinema 1 was the jewel of Dayton for nearly the whole time is was in operation. though rumors of the swimming pool on the roof were untrue.

Yes, Cinema 2 was outfitted for 70MM. It was used at least once during the summer of 1989…perhaps later.

Went up to the Dayton Amateur Radio Convention in May and I walked through the mall. Based on the descriptions provided here, I have what I believe to be a photo of #1 posted on Cinematour. It appears CJ Banks is Suite 700 and the remains of cinema 1 are labelled as suite 738. Cinema 1 is at Mall exit #2.

I am going to jump in here and say that I remember Cinema 2 being eventually equipped for 70MM presentations. I seem to remember viewing Roman Polanski’s film TESS in 70MM at Cinema 2. I also remember the 70MM print of TOWERING INFERNO being moved to Cinema 2 from Cinema 1, also. Cinema 1 and Cinema 2 were very well constructed and nicely equipped. Can’t say as much for 3, 4, 5, 6, 7, and 8. Pretty much cookie-cutter multiplex cinemas.

Michael, I understand completely, sorry if my comment was a bit misleading. In my humble opinion the answer to who was part of â€œselectâ€ engagements vs. wide distribution probably lies mostly with the way films were bid for and booked in that era. I donâ€™t remember when â€œblind biddingâ€ (bidding terms on unseen releases) was made illegal; however, bidding on films was still very much in effect. A bad bid, especially in competitive situations could literally mean the difference between success and failure of a theatre or even a small circuit. I remember sitting in many a booking meeting as we tried to determine how much we would offer the film companies to win a picture over competition. Some exhibitors even bid 100% or more in hopes to make a few bucks in popcorn sales on a big picture. Nasty times.

I donâ€™t remember the exact terms of Empire; however, Iâ€™m guessing that some of the Ohio cities you mentioned were limiting the number of screens they wanted to â€œgambleâ€ on Empire. It is not entirely unlikely that Cleveland exhibitors opted to wait on the select run to see how the picture performed and then send in an â€œeleventh hour bidâ€ on the wide break hoping to save a few percentage points. In addition, the co-op advertising requirements on the select run would have been much higher. With the original Star Wars, for instance, Fox called for a full 2-page pre-opening ad and a full page on opening day, etc. In a market like Dayton those two ads amounted to over 5 grand. Between 90/10 opening week film rental and a huge advertising outlay, there was a lot at risk.

Theatre owners often fail to see the forest for the trees, and the logic of the movie business is often a complete lack of logic. I know this is no revelation to a knowledgeable person like yourself.

BTW, I looked at your Empire web site. Very nice and professional effort. You are to be commended!

Yeah, except “Empire” wasn’t a normal release; it was released initialy in an exclusive, select-market manner and then a month later went wide. Your comments about Dayton all seem valid, but my remark about being surprised about Dayton getting two bookings had more to do with comparing it to the “Empire” booking situation in the larger Ohio market of Cleveland (which didn’t get it at all until the mid-June general release) and similar-sized market of Toledo (which had only a single booking).

It shouldnâ€™t be too surprising that EMPIRE had a two theatre run in Dayton. A two or three theatre run was normal for most releases. Although a mid-sized market, Dayton is divided, geographically, and to a degree economically, into three very distinct areas, North, East and South. First Run films never ran in West Dayton except for an occasional drive-in release. The Salem Mall or Kon Tiki (north), Fairborn or Page Manor (East) and Dayton Mall (or other South cinemas) was normal. The Dayton Mall Cinema One and Kettering theatres were the only viable 70mm cinemas in Dayton at the time. Everyone else ran 35mm mono sound prints.

Sadly, all of the above mentioned theatres are gone. The Dayton Mall One was, for a newer mall theatre, extremely plush and comfortable with a very large slightly curved screen. In short, it was a great place to comfortably experience a 70mm, 6-track stereo film.

A slight correction to the original entry: it was cinemas 3-4 which became a book store.

Hmmm. “Plutarchic”? The Greek biographer? “Plutarchian” maybe? Not sure what you mean…but I’ll take it as a compliment. :–)

On the subject of “The Empire Strikes Back” and the DAYTON MALL, I’ll take this opportunity to share the link to a list of the original engagement locations when the movie was first put into limited market release. It’s a pretty interesting list and was definitely fun to research. Lots of long-gone theatres on there including some definite “Cinema Treasures”!

In analyzing the list, what jumps out at me regarding Dayton and Ohio, is that Dayton (a mid size market?) got TWO bookings of “Empire” during this limited-release timeframe. Cincinnati, not surprisingly, got two. Columbus: two. Toledo: one. But the big surprise: Cleveland, which didn’t get the film at all in that initial lauch! And when they did get it upon the wide break a month later, they got it only in 35mm; no 70mm engagements for Cleveland.

Thank you for your Plutarchic correction.

Newspaper advertisements and trade coverage suggest to me that “Empire” opened on Wednesday the 21st, not Friday the 23rd.