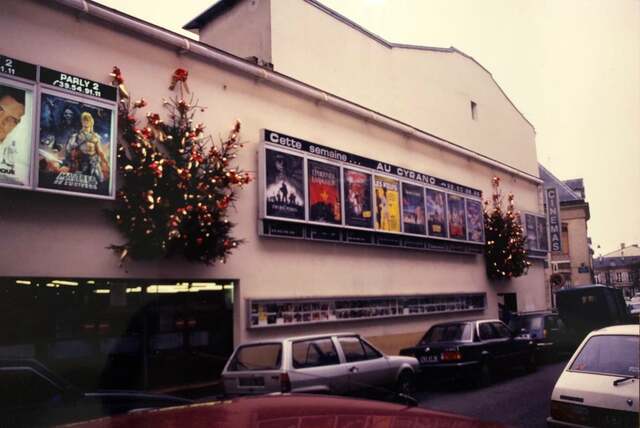 Located in Versailles, in the outer southwest of Paris. This theatre has the name of a popular character of the French Theatre: Cyrano de Bergerac. Built in 1929, the huge facade is designed with a tile picture of Cyrano. There was a stage which hosted variety shows. Seating was provided for 2,000 in orchestra, and two balcony levels. The projection box was located at the rear of the first balcony. Interior decorations were by interior designer Laurent Heilbronn.

It is a first run cinema, the biggest in Versailles, not so far from the famous palace. It has hosted premieres and The Beatles played a concert in 1964 in front of 2,000 patrons.

The Cyrano was one of the first big capacity cinemas of the suburbs to be multiplexed. Screen 1 with 500 seats is located in the upper part of the building and the original ceiling remains.

A new entrance was added on one side of the theatre and the old facade was restored around 1975. This eight screen cinema is very comfortable and has a luxurious design. In 2016 it was taken over by UGC.

This theatre was taken over by UGC in 2016, and is now called UGC Cyrano