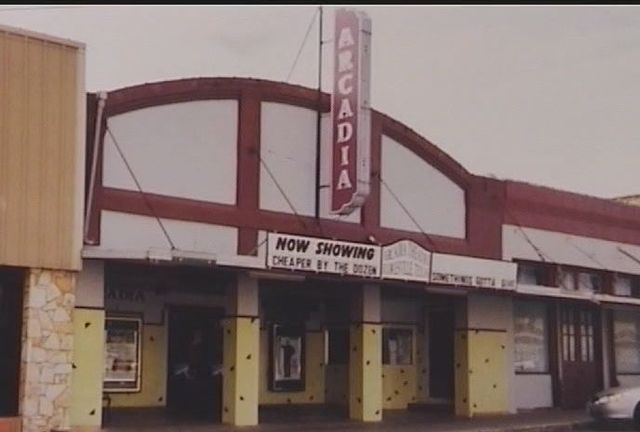 The theatre is currently family owned and operated. It was purchased by Galen and Jennifer Jansky in November of 1998 and completely re-modeled and re-opened on Febuary 11th 1999. In June 2000 the Janskys leased the building next door to the theatre and turned it into a second screen seating approximately 100.

The building that the theatre is in was built in 1911 and was ran as a dry good store until March 1928. Then Mr. Carl Johnson bought the building and turned it into a theatre and opened it on May 25, 1928. Mr. Johnson ran the theatre until the 1950’s and the sold it to the Driuk family and they ran the theatre till the late 1970’s. The theatre closed in 1978 and remained closed until the Jansky family bought it.

I guess rustic is the best style. It looks like a turn of the century commercial building, the kind with a quonset shaped roof. The sign might be from the late ‘20s to early '30s, and the lower part of the facade seems to have been renovated during the '50s in garish lime green and black tile.

Sorry…checked that link & it doesn’t work right. Try this one instead:
View link

Jackie Chan’s The Big Brawl was filmed in this theatre. video at http://www.youtube.com/watch?v=Hm4Qvx3Gbas 2-3 minutes in.