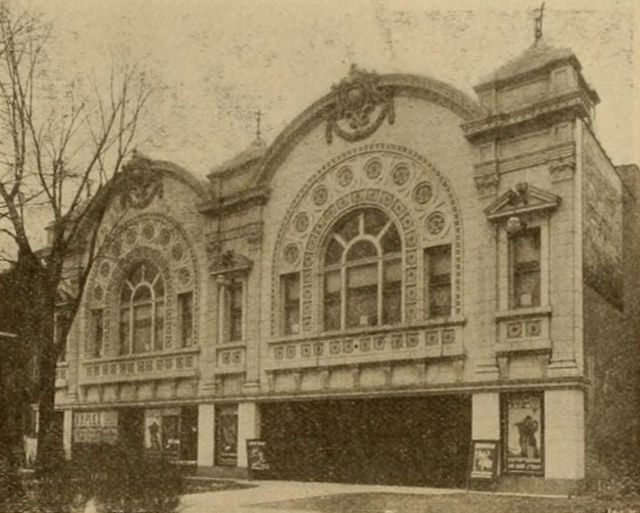 Opened December 15, 1915 with two adjoining 750-seat auditoria, the Duplex Theater was one of the country’s first twin theaters and pre-dates the multiplex craze by nearly five decades.

The Duplex Theatre was closed in 1922, but its place in exhibition history remains.

While doing research on the Duplex Theater in Detroit, I came across this item mentioned in the Michigan Manufacturer and Financial Record of Jan 22, 1916, and the same ad in Moving Picture World Feb 12, 1916:

“C. Howard Crane, architect, Dime Bank building, will ask for bids on a new theater for the Boulevard Theater company at 1537 Gratiot avenue, to cost $50,000.”

I wonder if this is the Cary Duplex Joe mentioned? Subsequent research has provided no further info on that address or theater in Detroit. Perhaps the design was commissioned and therefore in Crane’s records, but never completed? The Mar 19, 1918 edition of The Moving Picture World mentions that Fuller Clafin had charge of the Duplex, and was trying to spin the bad news of the theater only using both auditoriums on weekends. If he had charge of the theater as opposed to H.M Payne (who was touted as a theater operator of high quality) by 1918, and the Duplex closed in 1922, perhaps the financial situation of the Boulevard Theater Co. was too shaky to complete the Crane design on Gratiot. Clafin might have invested too heavily on his own and was forced to take over the daily operations.

These are all just guesses of course, but the pieces seem to fit.

I’ve rechecked the Crane project list in Ms. DiChiera’s thesis, and it looks like the Cary Duplex proposal dated from either 1912 or 1913. As project #96, it comes after the Comique Theatre (project #94,) opened in 1912, and before the Liberty Theatre (project #115,) which opened in 1913. Given the period, it wouldn’t have been the proposed theater on Gratiot Avenue announced in 1916.

Possibly the Cary Duplex project was an earlier proposal for a twin-auditorium theater that didn’t get built. The Duplex Theatre of 1915 was probably the project noted in this item from the September 5, 1914, issue of The Music Trade Review:

:“The Grand Boulevard Theater Co. which will build a picture theater on Grand boulevard, Detroit, has been incorporated for $100,000. The principal stockholders are Fuller Claflin, E. Henry Griffin, and Daniel H. Kerney.”

Nice work, Joe. I was thinking about checking the project #’s to see if they were in date order but somehow it slipped my mind amongst a pile of papers on my desk. With the bit from the Music Trade Review it seems that Claflin would have reason to take over in 1918 if the ship was indeed sinking and the $100K matches the advertisement for investors as well as the description in the Feb 12, 1916 Moving Picture World article.

In most cases when a theater building’s owners took over operation of the business, it was because they were unable to find any reliable operators willing to lease the house from them, so that probably was the case with the Duplex. A tremendous number of theaters were built in Detroit during the 1910s, so the city probably had too many seats for several years, despite its rapid population growth.

This must have been true for the Duplex, which had to compete not only with other neighborhood theaters such as the Norwood, opened the same year, but with the Regent, a larger and more palatial house that opened nearby on Woodward Avenue in 1916.

Many years ago the custodian of Metropolitan Methodist Church, near the Duplex, praised its arrangement to me. According to him it showed the same movie in both auditoriums but staggered the starting time. He liked that if you arrived in the middle of a movie, you didn’t have to wait around a long time to see its beginning.

I believe my grandfather, James C Ritter. My mother and his daughter was Eleanor Ritter Bradford.

This opened on December 15th, 1915. Grand opening ad from the Sunday before in photo section.

Here is a great article on this very strange theater.

Here is another item from The Moving Picture World, but I don’t think the proposed duplex house in Lansing ever got built:

“Lansing-, Mich., may have a duplex moving picture theater similar to the Grand Boulevard duplex theater in Detroit. Lansing men who are stockholders in the Detroit theater are said to be interested in the project. Fuller Claflin, the Detroit and New York architect, who originated the duplex theater, has been a frequent visitor to Lansing.

“The success of the duplex theater lies in the fact that they have two auditoriums, each one having a picture screen and each one entered from the same lobby. The program for these theaters consists of a run of short pictures, first in one auditorium and then in the other, followed by a feature picture as the program’s main attraction. The patrons are ushered, on their arrival, into which ever auditorium the short pictures may be running, after which the feature film follows in the same auditorium. Doors close on an auditorium the moment a feature film is started, resulting in a disturbance to no one. Regardess of when a patron arrives, he sees the feature picture from start to finish.”