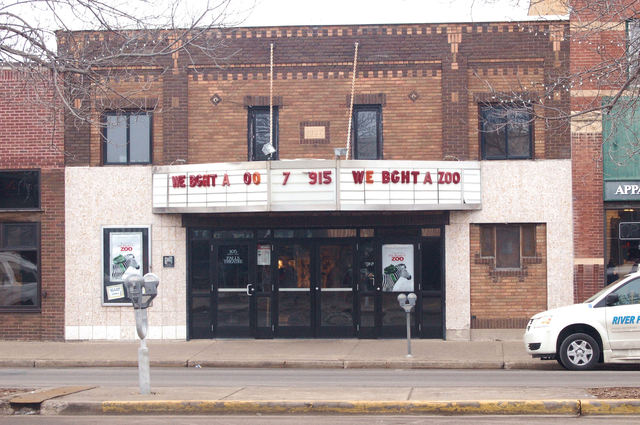 The Falls Theatre was opened August 29, 1927 with “Painting the Town”. It has been owned since 1972 by Stan McCulloch and his family. While the restoration of the theater is ongoing, the Falls Theatre screens first-run movies at bargain prices.

There is a photo on this page:
http://www.rfcity.org/about/nw.html

The FALLS Theatre has been an iconic part of the River Falls downtown since it opened in 1927. Owner Michelle Maher said it’s an integral part of the Main Street economy. “I think in general, our community, people end up seeing more movies in a theatre than they would in most communities,” Maher said. “And in doing that, they bump into friends and neighbors that they haven’t seen and didn’t expect to see. They have an experience that they cannot necessarily anticipate because it isn’t like it’s in their living room.”

Not so in River Falls, Maher said. The City worked with the theatre to obtain a state grant, most of which will go toward helping the FALLS Theatre expand to add a second screen in the building next door to the theatre, adjacent to Mel’s Midtowner Bar. It used to house County Line Insurance. “We’re excited to be able to partner with a longterm business in town, a small family-owned business,” said City Administrator Scot Simpson. “I think it will help. It’s really a pillar of the downtown.”

The city received an $82,600 state grant from the Wisconsin Economic Development Corporation. Work is due to begin this month on the $640,000 project and should be completed in Summer, 2018. While the grant was awarded to the city, a substantial portion of the proceeds will go directly to the theatre for the expansion project.

Maher said the community has largely been supportive of the theatre, and mentioned some Facebook comments on a post the city made about the forthcoming second screen. Some included:

Deborah Huppert said “Love going to Falls Theatre so glad and proud of them!”

Cindy Pechacek Kusilek wrote, “Thank you all who were involved for all your hard work to keep this River Falls Treasure alive and flourishing.”

Jeanne Aamodt wrote, “So happy for you and River Falls Michelle, your dad is looking down on you smiling, Thanks Stan!”

“I just hope they don’t ruin the feel of the place,” wrote Bobbi Ombui. “I partly go BECAUSE it is historic. I think RF is a little lax in the preservation department, They ‘improve’ beyond recognition or destroy many of the cities treasures. If I want a cineplex I go to Hudson.”

Maher said she isn’t trying to turn the Falls Theatre into a big movieplex. “We’re in the business of maintaining a main street community theatre that continues to run with the philosophy of making it available for everybody at the lowest possible price,” Maher said. “We are not interested in changing that model significantly. We just want to stay relevant into the future.”

Maher is open to hearing suggestions from the community about what they’d like to see in their movie experience. “We’re trying to stay open to listen to what our community wants because the theater is going to be more a part of this community through this process and dependent on our community in a way that I’ve never experienced as much of before.”

Maher feels a great connection to the theatre, which she said has a life of its own. “We are just its caretakers,” she said. “It provides an experience that you can’t get anywhere else and the space carries a kind of energy to depart from your daily life that feeds the soul for a moment.”

The Falls Theatre was founded by Maher’s father Stan “the Movie Man” McCulloch. “I think my dad passed it to me on a spiritual level, right before his death,” Maher said. “I don’t understand why it makes any logical sense why I’m willing to sacrifice as much as I do to be here and keep this theatre going. I love it. It feels alive to me. I protect it fiercely. I don’t want that to change. And I’ve got a son who’s interested … loves the movies … so it looks like there’s a future for the theatre. So I’m willing to invest into that, and everybody what I’ve talked to seems incredibly excited and supportive.”

Maher said the second screen will seat around 50. The box office will not change, Maher said. People will enter the new auditorium — which will also include new restrooms — the same way they always have. The new auditorium will have its own exit, however.

Maher said she’s just waiting for state approval on the finalization of the plans from the architect and contractor, Ross and Associates. Once that approval is given, construction can begin, Maher said.

She’s also considered the idea of an all-day showtime on Tuesdays, both to compete with other theatres' $5 Tuesdays and to better serve community groups. Showtimes will likely stay close to the standard 7 and 9 p.m. times; however, they might not always be exactly 7 and 9 p.m., as movies lengths tend to vary.

Maher said though the project is a huge commitment, she doesn’t feel too many nerves about it. “I think that’s because it seems like the universe wants it,” Maher said. “Our town wants it. I feel supported now by the state; it feels like it’s bigger than me.”

After the money given to the theatre, the city will use the remaining funds for projects such as resurfacing Heritage Park parking lot nearby the FALLS Theatre.