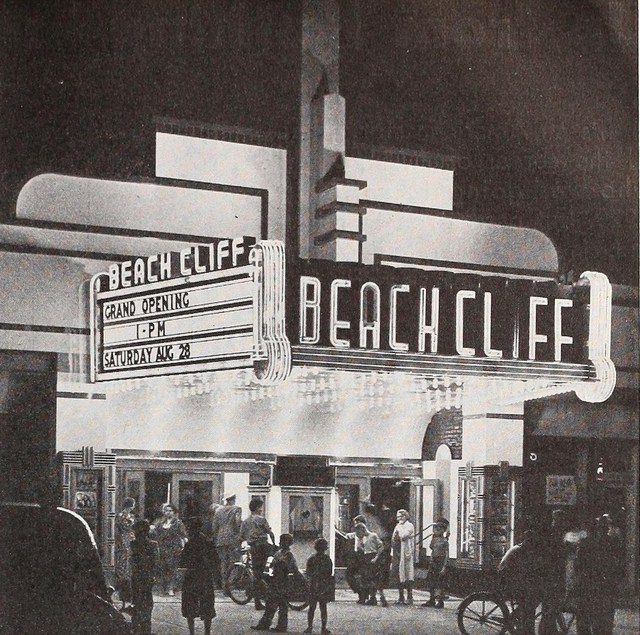 The Beach Cliff Theatre opened in August 1937 and closed in the mid-1970’s. The theatre space was remodeled into the Beachcliff Market Square Mall, with shops in the old auditorium space. The marquee is still used to advertise the mall.

Here is an undated photo:
http://tinyurl.com/2bhwsp

Here is some information about the theater renovation:
http://tinyurl.com/5mjtar

Plans for this as-yet unnamed theater located on Detroit Road in Rocky River were announced in Boxoffice Magazine of September 19, 1936. Cleveland theater architect W.S. Ferguson was designing the project for the Rocky River Development Company. Projected seating capacity was 1,227.

I’ve been unable to find the exact opening date, but the September 4, 1937, issue of Boxoffice said in a brief item that 2,000 people had attended an “open house” at the new Beach Cliff Theatre.

So far, the only picture of the theater I’ve found from the period of its opening is a shot of the projection booth that was the frontispiece of the Modern Theatre section of Boxoffice, October 16, 1937.

A small photo of the lobby of the Beach Cliff appears in a carpeting ad in Boxoffice, October 1, 1949. As this was thirteen years after the Beach Cliff opened (see my previous comment) the house must have been newly re-carpeted.

Nice reuse of this theatre.New marquee does look good.

A photo of the lobby of the Beach Cliff Theatre appeared as the frontispiece of the Modern Theatre section of Boxoffice of January 8, 1938.