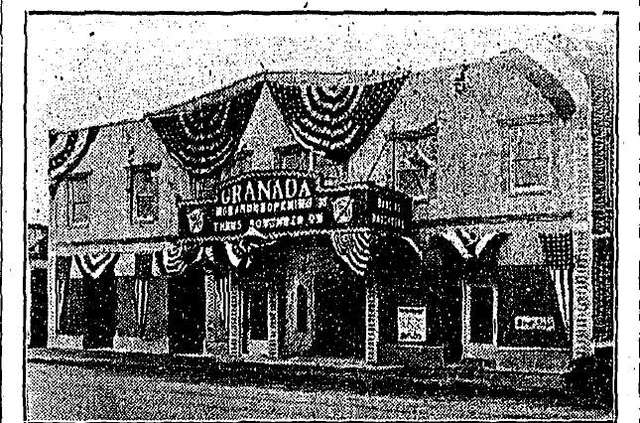 The Granada Theatre was located on West Main Street midway between Railroad Avenue and West Avenue and had 680 seats. It was built in 1928, opening on November 22, 1928 with Joan Crawford in “Our Dancing Daughters”. In its day, it was a very popular movie house. The marquee lasted until June 1965 when it was removed and the building became Two Guys department store. The building has since been razed.

This is all very interesting information. We are banking a lot of our dreams on the hope that people on the South Shore are as interested in Independent film as they are on the North Shore. What do you think? Times have changed and so has the community of Patchogue with the Artspace project bringing in 45 live-i-studio spaces for artists at the cost of $20M. Please check out our website: www.plazamac.org It would be great to get your input. We’re working very hard to raise interest and funds for a not-for-profit venue as described on our website.We also made a video and have a survey for people to fill out.

When you look at the theatre situation there are a lot of sections of the island that are no longer serviced. When I lived further west there were still art house venues in Huntington and Malverne. The other art houses disappeared a long time ago. I rely on the Westhampton Performing Arts Center and the Hampton Arts theatres for my independent experience. They are a lot closer to me than Patchogue. Sag Harbor often has an odd ball but that’s a haul. They were going to try something like that in Riverhead but that never came off. The Suffolk Theatre still sits there, more than 75% of the storefronts are empty as are the apartments over them. But there are several art groups, one of which I do portrait modeling for, and the Blues Festival which is a big draw. Vail-Levitt is still plugging along but is not a real force in the community. The towns have changed so much over the years and so have people. There is no sense of committment. Witness the diminishing sizes and graying of church choirs and all the community chorales and orchestras that have disappeared due to lack of membership and community support. You’re going to have a haul. Since WHB is flourishing maybe you should network with them.

Someone posted in another thread that the Granada was where the courthouse is now located, on the south side of Main St. at the west end of the Village. No idea if that’s true, but that’s what someone posted.

That someone was me, fairly recently. I believe it’s also referenced in the other comments on this site which you have to access apart from the first hit. Lead says there are 24 comments.

That is correct. It was approximately where the courthouse is now. I believe it was next to the last older building to the east is, so partly where grassy area is, and the east extension.

When I was a child my parents happened to drive thru Patchogue. That was probably in the 1950s. I was a movie theatre nut even then. The Granada was already dark by that time, and before it was converted to retail. When I came upon CT a few years ago it was one of the first things I went to check out, just to reassure that my memory was correct.

I also remember the Old Town Theatre in Smithtown Branch, which I added to CT earlier this year.

I also thought there was a Moriches Theatre, not the Center Moriches or the Jerry Lewis which became the Center Cinema. That I haven’t been able to confirm.

Referred to in an early ad as “Patchogue’s Homelike Theater”

Re my earlier posting. Page 1 of the Long Island Advance (now Patchogue Advance) for July 1, 1965 shows the marquee being removed from the building under the headline “Old landmark gives way to progress”. I’ll see if I can copy and paste it.