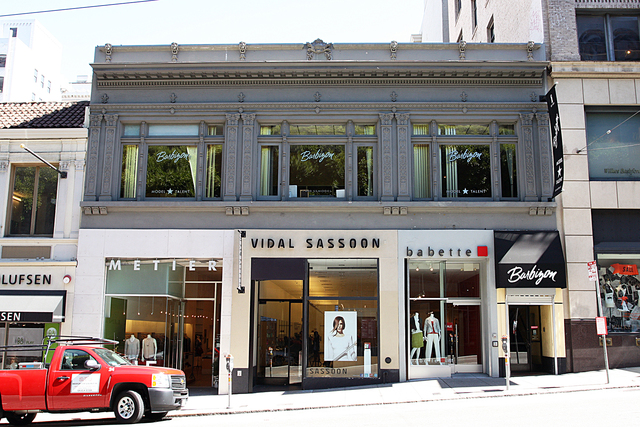 Another of downtown San Francisco’s small theatres…The Sutter Cinema opened on May 22, 1970 as an adult movie theatre playing the American premiere of “ZAP”.

In 2008, it is occupied by the Barbizon Modeling and Acting Studio.

In the early seventies it was definitely called the Sutter Cinema.

Though I can’t now picture exactly how far down, yes, it was close to the Canterbury Hotel but on the other side of the street.

The Sutter Cinema was a walk-up. Near the top of the stairs was a room with a desk in it. Behind the desk sat a woman who took the money and issued tickets. There was no “ticket window”. (Very vague on this: was there a coffee machine nearby? A small popcorn dispenser? Could be dreaming.)

Though I didn’t personally know anyone involved, I read back then that the woman who owned the place had previously been a performer in x-rated films herself.

Searched today for Sutter Cinema after reading of the death of the last of the Mitchell brothers. Never went to their place though I remember going by it often. Sutter Cinema was a very few blocks from where I lived.

My name is Holiday O'Hara, and I worked on and off at The Sutter St Burlesque Theatre at 369 Sutter St as an ecdysiast from it’s opening week, Nov 1976 till 80 when I went full time as stage manger and theatre manager till 83, when I left as it went “New York Live.” It closed in 84. It’s between Stockton and Grant. More later XOX ~ HOH

Holiday again. What many don’t know about this particular piece of real estate is that it was originally The Forbidden City, a famous Chinese nightclub, in the 1930s and 40s! XOX ~ HOH

Just watching “Freebie and the Bean” (1974) starring Alan Arkin and James Caan. The Sutter Cinema can be seen clearly in one of the car chase scenes. Many other good views of SF in the film.

Holiday O'Hara! It’s been YEARS. I remember when Larry and John owned the place and when it burned down. What happened to Stormy Weather?? or Malakamore (sp?)What happened to Judy? Has she written any more books?

Darn, I wrote a bunch of stuff and it just went away and didn’t post. I’ll try again later.

My late Father lived in a small apartment above that theatre at one time when it was a theatre. It felt very odd for me to go up the stairs thinking that he lived above an adult theater. When we first came to San Francisco in 1964, the building still had the Forbidden City marquee on the building. My Father always had the wanderlust and would move out of my Mother’s and go somewhere but this was the strangest place he ever lived.

Its funny how a picture can jar your memory years later. At the time it was running x rated films the theatre also had strippers working there for a time. I once knew someone who worked there as a stripper and she would do her sets and go and sit with men in the audience and get tips from them. I will have to ask her for details the next time we talk on the phone.

I worked there as the girl who sold tickets, popcorn, candy and coffee! It was the late 70’s. John and Larry owned it then. Mr Hofbrau was underneath the theatre and the the girls would go down there between sets to eat and have a drink. I worked at Mr Hofbrau first then went upstairs to work at the Sutter street theatre. Such memories!