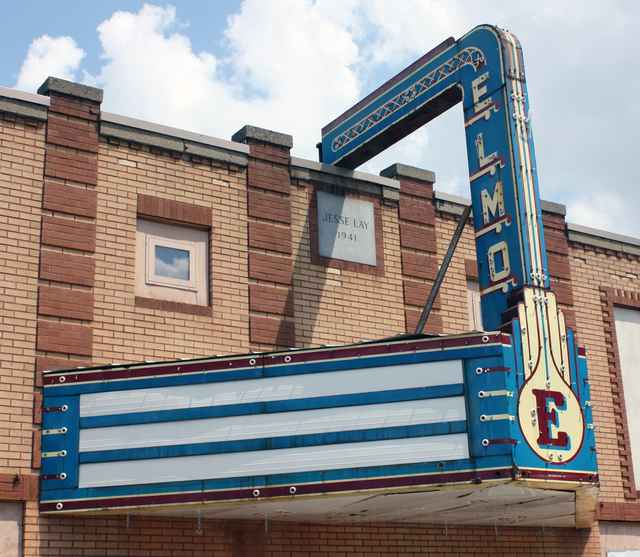 The Elmo Theater opened in 1941 on Saint Elmo’s Main Street, to replace an earlier theater of the same name on the site which was destroyed by a fire in 1940.

It features a brick, fairly plain facade, but its signage is its real highlight. The triangular marquee, now missing its glass, exposing where the neon tubing once was, featured a large “E” on its front. The vertical sign was L-shaped, reaching up from the top of the marquee towards the facade, with the theater’s name at one time illuminated by neon lights.

The Elmo has been closed as a movie house since 1979. In 2006, the St. Elmo Historical Society began working on the renovation and restoration of the theater.

There are additional photos on this site:
http://tinyurl.com/2o7jf6

I live in Vandalia and I have worked in plenty of movie theaters….. if you need help with this one my husband and I would like to help out.

This will be such a nice place when it is done….

Wouldn’t the blaze that destroyed the original theater be called St. Elmo’s Fire? Maybe it was started by Emilio Estevez.

According to the link jwballer gave, the fire was in the flower shop next door, the theater suffered minor damage at most.

I bet it looked good back in the day.