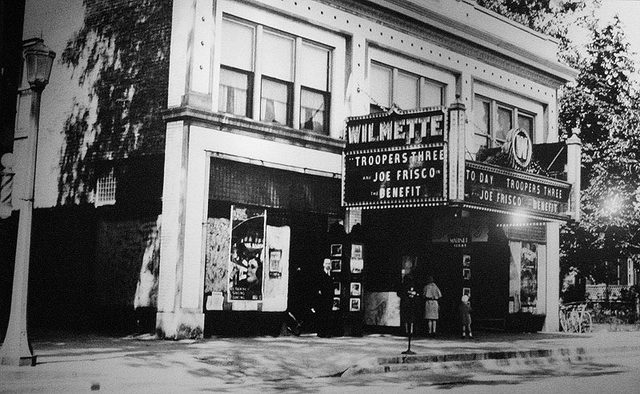 The Central Theatre was built in 1914. It was twinned in 1989, and, although the lobby portion of the building retains much of its vintage charm, the house is, sadly, down to concrete walls with acoustical panels. The exterior blends in with most other buildings of its era, but has a charming juxtaposition with its marquee and box office.

The shows are well worth it at only three dollars, and likewise reasonable concessions, and the fare is generally art and independent. It’s a gem! It was closed in March 2020 due to the Covid-19 pandemic. In July 2021 it was still closed, but was undergoing renovations and reopened on November 5, 2021.

My father worked for John Colburn in the late 50's or early60’s. Before going down to Vougue Wright & Fred Niles Studios (Which Oprah eventually bought).

I was at the Wilmette a couple times in the 60's, then again in the70’s.
Thought I saw “Hot Rod” with Pernell Roberts & Robert Culp there.
But I can’t recall if that was originally a theatrical release or made for TV. Might have been a second run of “The Wanderers” with Ken Wahl.

There used to be a vintage ice cream/burger shop called Bob’s about a block away. It had dark wood walls and old style ice cream glasses. Many families would go there with kids in tow.

I was googling and came across this clip of the theater on youtube:

Awesome find. Thanks for sharing.

There currently are more live music events at the Wilmette. Various members of the Chicago Cabaret Professionals have had featured showcases there, as well as at the Skokie Theatre.

P.S. That Wilmette Chuck Wagon next door had great burgers also back in the day. I believe it may still be there.

The following list is credited to and courtesy of Greg Wall. Via the “You Know You’re From East Wilmette When…” Facebook page.

1) It went back into business after a period of being dark in 66. It was being used as offices for an industrial filmmaker for a time.

2) Many long in the tooth theater ideas were employed by the management to drum up business, including kiddie matinees which featured terrible films by K Gordon Murry made on the cheap in Florida.

3) There was a record store next store briefly that might have been run by the same guy who ran the theater.

5) Double Bill: “On Her Majesties' Secret Service” and “The Secret Of Santa Victoria.”

7) The lowly “Chuck Wagon” next store has surprisingly been one of the districts most enduring businesses. Yet the Baskin Robins did close.

9) They had many great revivals: Including a Hitchcock Festival, King Kong, and The General.

10) It is over one hundred years old.

I recently posted a still from an industrial film featuring the Wilmette.

Chicago Tribune, October 27, 2015: “When Richard S. Stern talked about movies, it was clear to anyone who listened that he was in love with everything about them; their history, their stars, their distribution, and the art of knowing when a film would be a hit with moviegoers, son Mark Stern remembered Oct. 26. The passion Stern brought to his chosen profession extended to Academy Awards nights, when his family would sit in front of the television to see if the movies he predicted as winners would take home Oscars, said Mark Stern, himself a theater owner in Seattle. "We would watch the Oscar telecast, and when they would announce the winners and my dad’s predictions were right, we would jump up and high-five each other,” Mark Stern said. The elder Stern used that acumen for 40 years to make the Wilmette Theatre, 1122 Central Ave., in downtown Wilmette, a destination for both Wilmette residents who saw the venue as their neighborhood theater, and for lovers of art and foreign films, Mark Stern said.

Stern, 84, a 52-year resident of Niles, was killed Oct. 23 after being struck by an SUV while walking across West Golf Road in Niles shortly past 6 a.m. that day.

Without Richard Stern’s four-decade long stewardship of the theater – and his decision to sell it to four community activists instead of a furniture store owner who had put in an earlier offer – downtown Wilmette would be a less artistically rich place, said his son and two of the people who succeeded Stern as the theater’s owners. “My father had a great impact on Wilmette, by bringing really good quality cinema to a sleepy little downtown,” Stern said. “There were high times and low times, but when you would see the lines on many nights, one of the exciting things would be to say ‘Sold out!’ and to know your choice resonated with the theater goers.” “He really saved it,” Wilmette resident Carole Dibo said Oct. 26, as she remembered the man who bought the Wilmette Theatre in 1966 and sold it to her and three other community investors in 2006. “He was one of a kind. He believed with every cell in his body in what he was doing. Not many of us can say we love what we’re doing the way he did.”

Richard Stern, who grew up in Oak Park, was born into a family of movie theater owners, Mark Stern said. Richard’s father, Henry Stern, was credited with making the Cinema Theater, at Michigan and Chicago avenues, the first art film theater house in Chicago, he said. Richard Stern was already the owner and manager of other Chicago theaters when he starting eyeing the Wilmette market in the 1960s, Mark Stern said. When he learned that the shuttered Wilmette Theatre, then owned by Encyclopedia Britannica Films and used by that company for film shoots, was for sale, he made an offer and was told he had a week to come up with more than $100,000. He asked his father for a loan, and bought the property, Mark Stern said. Stern was as generous with others as Henry Stern had been with him, Mark Stern said: “He’s the type of guy that would literally get food sent to your door if he knew you were hungry. He’d give you money, not lend you money. He was big-hearted and generous.”

After renovating the theater and turning it into a two-screen operation, Stern decided to sell the business, Dibo said. He had a prospective buyer when she, her husband David Dibo, and two others, Sam and Judy Samuelson of Evanston, approached him, David Dibo said Oct. 26. Stern eventually sold to the foursome, who later turned the building’s operation into a nonprofit organization. “He was a very tenacious businessman and he wanted the highest price for sure,” David Dibo said. “On the other hand, he really loved the art of the film. …The appreciation of the artistic side really drove him, maybe almost against his basic business instincts.”

“When he wiggled out of that (furniture store) deal, he did it so he could sell it, and it would still would be an entertainment destination,” Carole Dibo said. She said Stern continued to visit the theater, talk about the film business, and even give advice, which she said often proved useful.

In addition to his son Mark, Stern is survived by a second son, Scott, of Evanston, and a brother, Laurence, of Glenview, as well as three grandchildren. His wife, Marlene C. Stern, died in 2011. His funeral service was set for 10 a.m. Wednesday, Nov. 4 at Chicago Jewish Funerals Chapel, 8851 Skokie Blvd. in Skokie, with burial in Shalom Memorial Park. Memorial donations can be made to the Hadassah organization, 60 Revere Drive, Suite 800, in Northbrook and at www.hadassah.org/chicago-northshore, Mark Stern said."

This has reopened per its facebook page at https://www.facebook.com/wilmettetheatre/