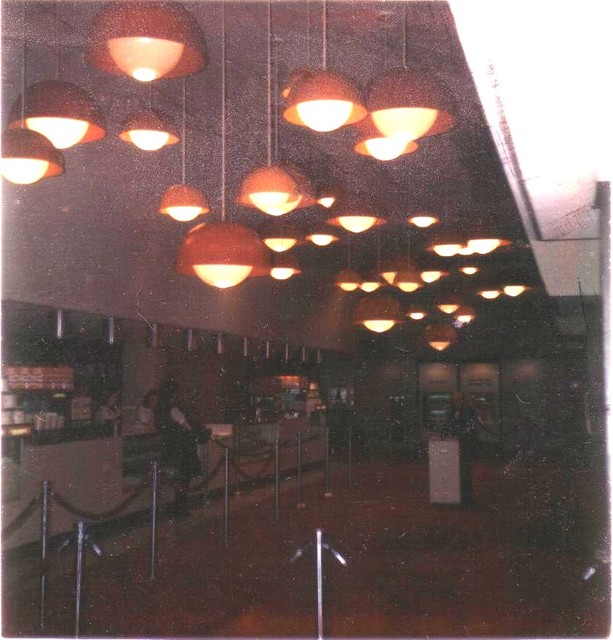 Oh, and I forgot to mention the shopping center has been re-named The Shoppes at Parma – you may think I’m kidding but I’m not, that’s really the new name.

Saw the original Star Wars here twice back in 1977 in the original Cinema II. After they hacked it into 3 parts it was a strange setup. The two new screens took up the back left and back right of the original cinema. You had to walk down a long hallway to get to the front part of the original screen. The screen was HUGE, but the theater looked weird because it was exceptionally wide, but only about 20 rows deep.

In 1977 Star Wars played at Mentor, Parmatown and Randall Cinemas, along with the Fairview, Severance and Avon Lake. That was unusual that a first run Fox picture would play in Cleveland GCC’s – back then we were on the Warner/Disney/Universal track. Loews was Paramount/Columbia, I don’t remember where Fox usually played in Cleveland. Now and then we’d get a sub-run Fox, Paramount or Columbia picture if a regular booking was doing so bad it had to be pulled, and needed to throw in something on short notice.

Years later when I was working for Loews in New York I found out that Loews and Fox had a major disagreement dating back decades, I suspect the reason was long forgotten. Until they resolved their differences in the mid-2000s you would never see a Fox picture, first-run or otherwise, in any Loews theatre.

dave-bronx, Can only guess that either GCC outbidded the others for Star Wars or they were in collusion with Fox that previously gave them the Westchester County, NY exclusive run of “The Towering Inferno” at Central Plaza, Yonkers, NY resulting in court case brought by Lesser Cinemas who wanted to run it at their Beach Cinema in Peekskill, NY. Google and that lawsuit is online.

Yes, bidding for the films, that’s how they did it [wink, wink]. Cleveland was, in the 60s and 70s anyway, a different animal. In those days there was one guy (we’ll call him Mr. X) in town who ran a booking agency. He also ran an advertising agency and also had a local chain of theatres. He booked the films in all the theatres in town, General Cinema and Loews included, whose own booking departments booked all their other theatres in the US. His advertising agency handled all the co-op ad campaigns, except the rare instance of an exclusive at any one or two of GCC screens, then Parmatown’s manager handled the campaign. Also, as stated below, in the Cleveland market General Cinema got all the Warner, Disney and Universal pictures, Loews played all the Paramount, Columbia and MGM/UA films, but the theatres owned by Mr. X got some of all of them. He ran the whole show, as it were. Back then, if you wanted to play ball in Cleveland you played it his way or you didn’t play. Oh, I almost forgot, Mr. X was also the landlord to most of the distributors Cleveland branch offices.

A few random details—-the original Parmatown strip opened in 19655, the same year as Shoregate (as well as Southgate) and a year after Westgate and Eastgate). May Co—which was a huge branch opened in 1960. It was the west side counterpart to Mays on teh Heights which was across the street from an established shopping center (Cedar-Center which went up right before and after WWII). Higbee’s and the mall opened late 67/early 68. Forest City created shell corportaions for its various properties and allowed them to go bankrupt when it wanted to unload the properties—they did this with Shoregate, too. They’ve been offloading much of even some large properties like Tower City in Cleveland as they take on mega-mixed use projects in places like NYC, LA and DC—bigger, more prestigeous properties seem to actually be sold rather than bankrupted. Forest City was a lumber yard that became a home builder/developer and also developed shopping centers, initially, where they owned land for residential development. I’m assuming dave-bronx speaks of the Film Exchange and its owner whom I would guess probably had connections to organized crime—-not unusual in the Cleveland of the 30s-70s and in some ways not much different from what can happen in the legit business world—-I recently discovred that a much revered, wealthy relative had some price fixing issues in his background. The Film Exchange at 2100 Payne Ave still exists and is landmarked although the movie companies are long gone. A cousin of mine worked for Columbia Pictures there—during one of the takeovers of Columbia, she was cut loose w/o a pension.

Final day of business at Parmatown Mall Cinemas was 8/12/2004. The final films shown were The Village, Catwoman, A Cinderella Story, I Robot, Anchorman, and Spider-Man 2.