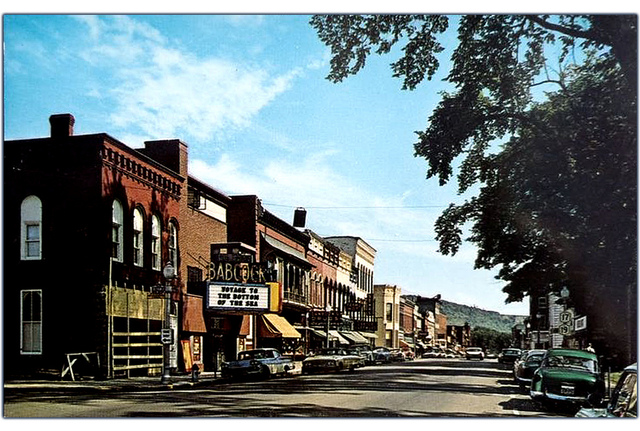 The Babcock Theatre was opened as a 450-seat movie theatre in April 1919. It is located on Main Street in Wellsville, which is the home town of actor Gabby Hayes, who performed on the stage of the towns playhouse theatre, the Baldwin Theatre, which burned in 1914.

The Babcock Theatre was equipped with RCA sound in the early-1930’s. Somewhere around 1933 Jack Warner of Warner Brothers bought the Babcock Theatre and began renovations to make it a “new style cinema”. 25 feet from the street front through the lobby and into part of the theatre was torn off and reconstructed. Then there was room for a lobby with a concession stand, a street front box office and a new style smoking balcony that all supported the new V-shaped marquee. The new projection booth was installed in the balcony that shined down onto the screen below. The Warner Brothers brass coat of arms was placed above which is still there today.

The theatre ran with great success through the 1940’s, 1950’s and 1960’s until it fell victim to TV and videos. The owners at the time allowed it to fall into bad shape and by 1979 they where ready to close the doors for good.

Then a native of Wellsville who had recently returned from California bought the theatre and took the challenge of carrying it through the rough time. In 1982 he enclosed the balcony and made it a piggy back twin. The original booth in the balcony now services the upstairs screen and a new projection booth was built on the back side of the lobby to service the downstairs original screen. Also electronic lamp houses and platter systems where added.

I came to work here in 1993 a fell in love with the place. I ran the theatre until 1997 when it was leased out and I lost my job. In 1999 I bought a building in Pennsylvania and converted it into a theatre and operated it until 2004 at which time I had sold it. I returned to Wellsville with my fiancé and we bought the theatre on May 21st of 2004. We changed the name to the Grand Theatre and opened with “Shrek 2”. Our first show was a sell out. The theatre sure needs some updating and fixing up, but is workable and has a good customer base.

Following closure in March 2020 due to the Covid-19 pandemic, it reopened from June 11, 2021 and operates with one screen.

Interesting to note that actor, Gabby Hayes was from Wellsville NY In nearby Bradford PA the actor who played Boss Hogg on Dukes of Hazzard and the famous television ‘drunk’, Foster Brooks were both from that PA oil town.

Darren: Thank you for taking the time to give us a tour of your “grand” theatre! Next time we’ll check out the Warner Brothers brass coat of arms!

Here is an undated photo:
http://tinyurl.com/yw5pat

ken mc: What a great vintage photo that shows the theatre when it was called the Babcock and wasn’t twinned until later.

Nice to read something about this theatre in Wellsville though I was hoping to read some words from the manager, Darren. I don’t even know if he is still the manager of a theatre that has sadly been twinned, imo.

I remember working the concession stand at this theater during my summer vacations from high school and college during 1981-1984. At that time it was known as the Lin-Ray Twin, a play off the names of the then-owners Linda and Raymond Hunt. And yes, Lost Memory, before that it was known as the Babcock. Those were good times — I miss working there! Thanks for the memories, guys :)

From the 1950s a photo postcard of the Babcock Theatre in Wellsville.

The Grand in Wellsville is in a quaint central NYS town. Does anyone know the current status of this theatre? When last I visited the Grand had been twinned with the balcony area enclosed to show another movie.

Sadly, theatres across the country are now closed due to COVID-19.

The Grand Theatre Twin closed for the COVID-19 pandemic on March 16, 2020. It relaunched on June 11, 2021 with a single screen operating and showing “Sprit: Untamed.”