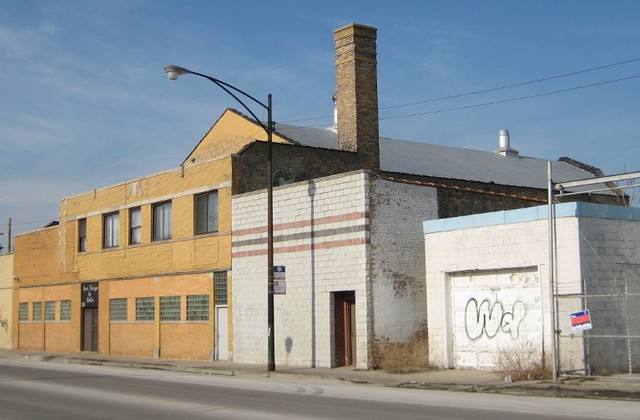 The Elston Theatre was opened prior to 1914. It was located in the Avondale neighborhood, on Elston Avenue, near the intersection of Elston Avenue, California Avenue, and Belmont Avenue. In 1935, was renamed the Fox Theatre. It closed in 1949 and today the building is used as a warehouse.

Now used as a warehouse. Auditorium is 99% gutted and used for storage.

Gust A. Stathis, theater operator, was one of the buyers of the Fox Theater, 3161 Elston Avenue, recently reported purchased by Dr. Ansel H. Tulupan, for $35,500, through the Mark Levy Realty Company. Stathis is operating the theater.

Some of the information above is incorrect. The Elston (3167 N. Elston) and the May (3159 N. Elston) were entirely separate theaters, and operated simultaneously the 1910s. The Chicago Daily Tribune listed display ads for the May in 1916 & 1917, and for the Elston starting from as early as 1914.

The May had been converted to a brass foundry by the 1920s.

Looking at the Sanborn Fire Insurance map from 1950, the Elston/Fox was at some point expanded in capacity from 300 seats to 800 seats when the center building with the high roof was built. Initially it had occupied just the section of the building pictured on the far left of the photo above.