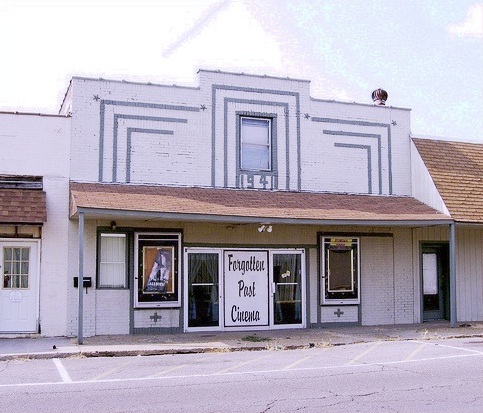 This small theatre was located in the heart of town on W. Main Street. Opened in 1941, seating 312. The front of the theatre was a red brick with white trim with a small marquee above a wooden portico over the entrance of the theatre. There was a video rental in the lobby of the theatre at the time it closed.

Closed as Movies & More in the early-1990’s, it later reopened as Forgotten Past Cinema screening classic movies, which closed in 2014.

I encountered one of the owners of Movies and More while doing laundry at a laundromat she also owns. She told me that the theater was originally called the Demo (an anagram of the names of the founders), and that it was presently closed because it’s difficult to find reliable employees.

This theater has most recenly been known as Movie Magic Theater, and I believe it is still open. I first went to this theater in the mid 80’s, when it was known as the Demo. At that time, they had DEMO spelled out in different colored lights above the entrance. It was very distinctive looking at night. The Demo throughout the 80’s and 90’s was always open only for part of the year, and only on weekends. They usually showed movies a few weeks after they were in nearby Sikeston. I remember seeing NOMADS, FIREWALKER, THE STUFF, and RETURN TO HORROR HIGH among others here. Sometimes they would surprise you, though! One weekend, they had a free showing of I HATE YOUR GUTS (aka THE INTRUDER), a 1960 black and white Roger Corman movie starring William Shatner that had been filmed in East Prairie and nearby Charleston. Despite the exploitation title on the print they had, this is actually a very good serious drama with one of William Shatner’s best performances early in his career. It was also the only Roger Corman movie to ever lose money, and to this day, remains very rare. I can only assume the owners at the time had kept a copy of the film.

The Demo had changed names to Movies & More and added the video store by 1997, when I moved from the area. The last time I was in East Prairie was I believe 2006, and at that time the theater was open (part time as always), and known as Movie Magic Theater.

No listings, did it close down?

This theatre is closed.

Is the video library still open?