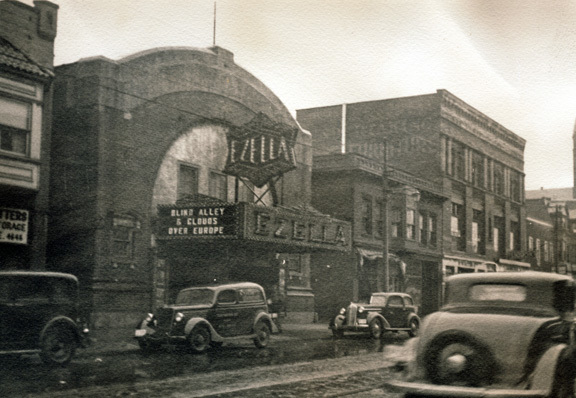 Opened by 1911, the Ezella Theatre was owned by Modern Theatres, Inc., Owners: The Essex Brothers – Jack & Ray – and a rotund little man named Howard Reif. It was remodeled in 1941-1942 to the plans of architectural firm Matzinger & Grosel. The theatre was almost an exact duplicate of the Vine Theatre in Willoughby, Ohio. My memory is fading, but as best I can recall, it had 1,400 seats on one level. Last time I worked there as a stagehand was in 1958.

The place was in good shape – surprisingly so, since it was located in what was even then considered to be a “seedy” part of town. There was nothing very unusual about the Ezella. It had a large projection booth, with two Super-Simplex projectors fitted with Peerless MagnaArc lamp-houses; an RCA sound system, and “El Cheapo” anamorphic Cinemascope lenses that were vastly inferior to the Bosch & Lomb lenses that were in wide use at the better theatres around town.

One interesting sidelight: Directly across an alley at the rear of the theatre, was a fairly large, two-story wooden storage building that looked like it had survived from the last century. I was told that an undertaker used it to store coffins. About three or-so years after I last worked at the Ezella, I learned that the old building had caught fire, and posed a real danger to the theatre building. Newspaper reports credited a young assistant theatre manager with doing a great job of making an announcement from the stage to the people in the audience, instructing them on the proper manner for safely exiting the theatre. I understand that damage to the Ezella building was minimal.

USELESS TRIVIA: The phone number of the Ezella Theatre, back in 1957 was HE-1-2071. (The ‘HE’ stood for HENDERSON). The building is today home to a church.

TO Jim Basnik, Jim Somich, et al: The Ezella Theater was extensively remodeled, modernized, and enlarged during the winter and spring of 1941-42. The old theater closed just after Pearl Harbor and reopened the Friday of Memorial Day weekend in 1942 — to be exact, May 29, 1942. The opening feature was “Two Yanks in Trinidad” starring Pat O'Brien, Brian Donleavy, and Janet Blair. The auditorium had 1380 seats. The theater closed sometime in 1969, after paring down to a Friday, Saturday, and Sunday operation in 1967.

The bingo game on Wednesday nights was called B-A-N-K-O and was conducted by the theater manager immediately after the first feature (if there was a double feature) or the first show (if there was only one feature).

The address of the Ezella was variously listed as 7007 and 7011 Superior Ave., depending on whether you were reading the movie ads in the Plain Dealer or the afternoon Cleveland Press. There was a citywide movie projectionist’s strike in 1945, and the Ezella was closed for a couple of weeks.

If you wanted refreshments at the Ezella in the early 40’s, you had to purchase them before you went in at the Ezella Sweet Shoppe next door west of the box office. The lobby concession stand was not installed until about 1946, at which time the Sweet Shoppe closed.

There was a navy blue, white-lettered “Cooled by Refrigeration” banner that hung from the bottom of the marquee (both sides) during the summer months. During the war years, “Buy Bonds” was posted on the front of the marquee. Yes, the Mayland Theater (which opened in the late 40’s) did resemble the Ezella, at least on the outside.

The Liberty Theater was actually owned by Loew’s in the 40’s. The Yale was on St. Clair at E. 89th St., and there was a very small, run-down, fourth-run movie house, called the Superior Theater, on Superior at E. 83rd or E. 85th (north side of Superior), with practically no lobby. Their claim to neighborhood fame was that the gave out dinnerware to the ladies one night a week. Rumor had it that an occasional rate was seen scurrying through the auditorium, though I could never confirm that.

I lived in a rat-infested apartment building at the corner of Wade Park Ave. and Giddings Road from 1941 (when I was 4) to 1948 (when I was 11). Since the Ezella changed programs three times a week — on Sunday, Tuesday, and Thursday in the later 40’s — I was often there three times a week, usually with my mother. Admission was 20 cents for her, a dime for me. When we moved out to Euclid in 1948, it was in time to be in attendance at the opening of the Lake Theater in the late summer of 1949.

Ten years ago, I wrote an as-yet-unpublished memoir called “The Ezellaration of Richie”, essentially about various aspects of my childhood and how the Ezella and happy movie endings of the 40’s got me through a difficult growing-up process.

To Jim Basnik: When I was doing research for my book, I printed off the movie page of the Plain Dealer from microfilm, as it appeared on a Sunday in 1945. There were approximately 80 neighborhood theaters in the greater Cleveland area in those days, including several “seedy” downtown theaters that showed double features. Factoring in the eight first-run houses downtown (Palace, Hipp, Allen, State, Stillman, Ohio, Mall, and Lake) and the five theaters at E. 105th and Euclid, Cleveland had very close to 100 movie theaters at the peak of the Golden Age of Hollywood.

I have read in several sources that Hollywood’s all-time record year for new releases was 1946, but I’ve never seen the exact figure. Does anybody know what it was?

Thanks for the new Ezella information. It is my all-time fave nabe.
According to films101.com
http://www.films101.com/y1946r.htm
there were only 48 pictures released on 1948, not even close to a record. How about 160 films on 2004?
Please post anything else you remember about any of the theatres you mention.
Jim Somich

That films 101 webpage up above lists 62 films for 1946. It lists them as the 62 “most notable” films of the year. There were a lot more than 62 filsm released that year – generally there were considerably more movies per year back then than there are now (many more “B” movies, etc.)

That’s a pretty horrendous remodel by the church. It looks like they covered the marquee with tin and painted it brown. Also some kind of false brick front. I’m sure the theater looked better than this in its day.

Picture of the Ezella asa church from 1985:
View link

The Yale would have been at the end of Yale Ave, where it met St. Clair, just past Liberty Blvd/MLK.

The Ezella was part of a small business district that included an A&P and a Kresge (one of the few neigborhood Kresges’s to survive their big store closing round in the early 60s). The A&P survived into the early 1970s.

Boxoffice of April 21, 1941, said that Scoville, Essick & Reif would rebuild their Ezella Theatre. Construction was scheduled to begin that spring. An earlier Boxoffice item about the project had given the seating capacity of the original Ezella as 600.

The introduction above and some comments on this page say that the Estella resembled the later Vine Theatre in Willoughby and the Mayland Theatre in Mayfield Heights. Both of those houses were originally built for the same circuit that operated the Ezella, and both were designed by Cleveland architects Paul Matzinger and Rudolph Grosel.

Though not all of the Scoville, Essick & Reif/Modern Theatres circuit houses mentioned in Boxoffice over the years are specifically attributed by the magazine to the firm of Matzinger & Grosel, a 1947 item did say that most of the circuit’s theaters had been designed by them. Given the similarities noted above, the rebuilt Ezella was most likely one of those Matzinger & Grosel designs.

Photos of the Ezella illustrated this article by decorator Hanns Teichert in Boxoffice of August 5, 1950.

The Ezella Theatre was listed in the 1911 Cleveland City Directory. The Cleveland Landmarks Commission confirms Matzinger & Grosel as the architects of the extensive rebuilding of the Ezella done in 1941-42.